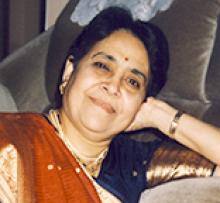 On September 16, 2020, Illa ben Raval (born Pandya), loving wife, doting mother and devoted grandmother, passed away at the age of 81. She took her last breath peacefully at home, surrounded by her family.
Illa ben is survived by her husband Dinesh bhai, three sons, Nitin (Tina), Mayur (Rachelle) and Hitesh (Reneé), and her six grandchildren, Nikeel, Yesha, Quentin, Ashley, Shay and Kiya.
Illa ben was born on December 31, 1938, in Masindi, Uganda, the second of nine children to Shanta ben and Mayashanker bhai Pandya, and the first girl to bless the household.
In 1941, when Illa ben was three, the family moved to Lugazi, Uganda where they remained for the rest of her childhood. In 1948, at the age of 10, Illa ben embarked on an adventure to boarding school in India, where she studied until her return to Uganda at the age of 14. Illa ben was known for her keen interest in the arts, including Indian cultural dances. Her accomplishments in dancing were such that she was selected to perform for the British Governor General of Uganda.
In Uganda, Illa ben embraced her role as eldest daughter, achieving the highest standards at school, and keeping her younger brothers and sisters well cared for and in line at home. She was known affectionately as the family enforcer and had her parent's unwavering support. From a very young age, Illa ben had a strong sense of family, pride in each one of its members, and a passionate desire to care for and preserve family unity. She carried this forward until the last moment of her life. She will be remembered for her loving affection towards her family and generosity of spirit, warmth, and good food.
In 1958, Illa ben married Dinesh bhai Raval and moved from Uganda to Bujumbura, Burundi, where she had three sons. In 1975, the Ravals immigrated to Canada, and settled in Winnipeg, Manitoba. She worked tirelessly in Winnipeg bringing up her children and grandchildren with amazing zeal and love.
The family would like to extend our deepest gratitude for the care and empathy shown by the staff at St. Boniface Hospital and specifically by those in the Palliative Care and Dialysis Units. We would also like to thank all of the family friends that have supported Mom through her illness.
A private ceremony with family only will be held.
In lieu of flowers, donations may be made in Illa's name to the Kidney Foundation at www.kidney.ca.