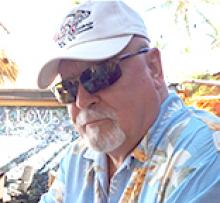 After a short but hard fought battle we lost a good man. Len passed away peacefully at Juravinski Hospital in Hamilton, Ontario, with Gail by his side.
Len will be missed and lovingly remembered by his wife Gail Ramsay, sister Norma Lotecki, brother-in-law Tom, nephew Ryan, nieces, Heather (Erik, Oliver and Sarah) and Shannon (Jacob and Julia). He will also be fondly remembered by Gail's daughter Kim (Mark, Jackson and Jaime) and his dear friend Ed.
Len was raised in Beausejour, Manitoba and spent his early adulthood there. Later work took him to various places in Canada and Ontario became his home.
Len and Gail shared a love of travel and took many trips together. Their love of Italy took them there four times. Many winters were spent in warmer climates. There were six trips to Dominican Republic where they made many wonderful friends. We are blessed to be amongst the few allowed past his tough guy facade and see his soft side.
Len was predeceased by his parents, Frank and Julia Wilgosh.