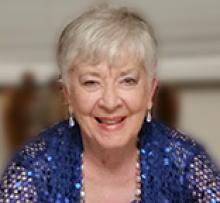 Peacefully, with her family by her side, Bonnie went to be with the Lord on September 16, 2020.
She will be lovingly remembered and deeply missed by her sons, Alan and Scott (Bonnie) and daughter, Terri (Darren); her grandchildren, Michael, Andrea, Matthew, Steven, Bethany, Kelsey, and Madison; former husband Victor; cousin Gayle Van Hemert and family; and special friend Bill Atkinson.
Bonnie was predeceased by her parents, Roy and Ruby Smallman and her brother, David Smallman.
Bonnie was born in Charlottetown, PEI on October 10, 1937, where she grew up. Bonnie's father was a pharmacist and owned a drugstore in downtown Charlottetown. Bonnie enjoyed spending time with her father at the pharmacy, and at age 12, started working there. After graduating from high school Bonnie attended the Prince of Wales College in Charlottetown. She later worked as the secretary to the Registrar.
When Bonnie was 19 she met Victor Cameron and they were married in 1959. Vic's career in the RCMP took them to many destinations in Prince Edward Island. Their first son, Alan, was born in Charlottetown in 1961. After being transferred to Alberton, their second son, Scott, was born in 1963. While they were living in Summerside, they welcomed a daughter, Terri, in 1965. The family moved to Souris in 1970 which proved to be their last stop on the island before being transferred to Winnipeg in 1972.
As they settled in the city and their children grew, she went back to school and obtained her Bachelor of Arts in Developmental Studies at the University of Winnipeg. Shortly after graduating, Bonnie began working at Beaumont School. She worked there for 14 years before retiring in 1997.
She attended Grant Memorial Baptist Church and was always happy to volunteer. She enjoyed her time as a member of the Golden Echoes choir. She met many of her closest friends while attending the church.
Some of her happiest times were spent with her family and she enjoyed long chats with us. Mom was always on the go. She loved shopping and going out for lunch with her family and friends. Once spring arrived, she enjoyed her time on the veranda with a cup of tea and a favourite book, spending time at the park and going for drives in the countryside.
She will be greatly missed by her family and the many friends that she has met throughout her life. Mom loved her family very much and gave of herself. She was always there to support us. She was a very special mother and grandmother.
The family would like to thank the GH6 and GH7 staff at the Health Sciences Centre for the excellent care that they provided for Bonnie and her family in the last days of her life.
A celebration of Bonnie's life will be held at Chapel Lawn Funeral Home and Cemetery, 4000 Portage Avenue.
Due to COVID 19 gathering restriction, attendance will be by invitation only.
In lieu of flowers, donations may be made to the Heart and Stroke Foundation.