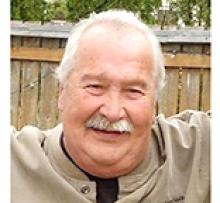 John Raymond Koley (Ray), 79, of Teulon MB, passed away on Saturday, September 19, 2020, after a lengthy battle with Cancer and Alzheimer's.
Born August 24, 1941 in Winnipeg, MB, he was the son of the late Andrew Koley and Elizabeth Koley (nee Wasalina).
He is survived by his two sons, John Koley and Kevin Koley and wife Lise; his five grandchildren, Chantelle, Erik, Daryl, Karlee and Brin; three great-grandchildren, Deegan, Everett and Quinn.
Ray is predeceased by his parents as well as his longtime partner, Brenda Meyers.
A memorial service will not be held, instead the family will be holding a private wake to honour Ray's life.
If friends so desire, they can donate to the Winnipeg Humane Society in Ray's name, in lieu of flowers.
The family would like to thank the hospital staff at both the Johnson Memorial Hospital, Gimli and the Hunter Memorial Hospital, Teulon, for the kind and gracious care Ray received.
Everyone who crossed paths with Ray during his walk through life remembers him for his kindness, sense of humour and willingness to help. He will be missed but always in our hearts.