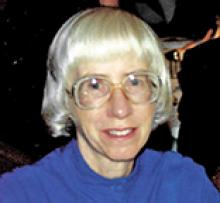 Born February 27, 1930, in Saint-Boniface, Manitoba to Joseph Faucher and Clara (née Beaudry) Faucher. Third eldest of 11 children, she was predeceased by her parents, brother Fernand Faucher, sister Annette Trudeau, first husband Wilfred Marion and second husband Bob Hughes.
Left to morn are her siblings, Denise Gabbs, Irene Vincent, Rolande (Clarence) Lavasseur, Adélard (Dianne) Faucher, Edgar (Minnie) Faucher, Claudette (Don) Cates, Yvette (Ken) Baskerville, Paulette (Larry) Faucher, and many cousins, nieces and nephews.
Rita was a highly intelligent and successful woman having graduated in 1957 from St. Boniface Hospital with a degree in laboratory technology. She then relocated to Vancouver, British Columbia where she eventually became the supervising technician researcher at the Haematology Research Lab at Vancouver General Hospital where she was employed until her retirement in 1986. Though forever modest of her accomplishments she was part of many research endeavours and had co-authored several papers in various medical journals.
Rita adored travelling and did so for many years. She has graced several continents and aside from being at her home in Vancouver her most favourite and enjoyed destinations were Hawaii and Las Vegas. Rita would travel anyway she could, whether it was first class or sleeping in a car on a rural road in France she would often say "I just need to get there".
Rita had developed C.O.P.D. after a severe fungal infection while in Arizona. She suffered from C.O.P.D. for many years and finally succumbed to her disease on September 21, 2020, at the age of 90 years.
Her quick wit and sharp humour will be forever missed.
In lieu of flowers, please donate to Manitoba Lung Association, 825 Sherbrook St., Room 204, Winnipeg, MB R3A 1M5, phone (204) 774-5501, mb.lung.ca
Graveside service will be held Saturday, October 3, 2020, at 1:00 p.m. at Richer Cemetery, Richer, MB.