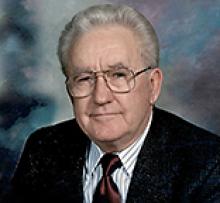 Peacefully, on September 22, 2020, Peter Loewen passed away at the age of 92.
Peter is survived by Katie, his wife of 69 years, son Rick (Ingrid) Loewen, daughter-in-law Elsie Loewen and grandson Scott (Whitney) Loewen. He was predeceased by his son Ernie Loewen, sister Mary Dyck and parents Peter and Maria Loewen.
Peter was born on January 1, 1928, in Steinfeld, Ukraine and after experiencing many challenges during the Second World War, immigrated to Canada in 1948, where he met Katie. For most of his life, Peter worked in construction and built many homes under the name of P Loewen Construction. Rather than retiring, he went on to open two restaurants in Fort Garry Place – Kronen Pizza and Peter's Café.
Peter's leisure time was spent watching hockey, spending time with family and friends at Brereton Lake, playing golf and watching grandson Scott compete in golf tournaments. When he finally retired, Peter took up flower gardening.
Peter suffered a stroke in 2009, and worked diligently to improve his mobility to the point where he could walk with a cane. He was very self-disciplined and also well looked after by Katie. In March, his health began to decline rapidly and in June he moved to Bethania Personal Care Home, where he received excellent care.
Peter was laid to rest at Glen Eden with a small family service. There will be a memorial service when restrictions are lifted, and grandson Scott is able to travel to Canada.
If friends so desire, donations may be made to Bethania Mennonite Memorial Foundation.