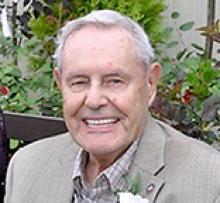 Our hearts are aching as we announce the peaceful passing of "Jack" Jean Harvey Tessier at Morden, Manitoba on Saturday, September 19, 2020. The family is grateful that he enjoyed good health and had only a brief overnight stay at Boundary Trails Health Centre.
Jack was born at Cypress River, Manitoba to Fanny Irene Harvey and Jean-Marie Tessier on August 15, 1928. He lived his early years in Cypress River and Mariapolis before the family moved to Winnipeg. Jack received his education from the Jesuits at St. Paul's. Until the age of 12 he was an altar boy and attended Mass daily. This, along with his resulting grasp of Latin, genuinely amazed his children. As a teenager Jack joined the Reserves, worked as a bellhop, set bowling pins and sold newspapers on the corner of Portage and Garry. In later years, he sometimes amused the family with his street vendor's litany of "Read All About It" wartime headlines as though he were still huddled on that blustery corner hollering at passersby. Not long out of high school, Jack began his career with the CPR at Kenora, Ontario. In 1951 he met and married, Norma Kathleen Caithness, a nursing student from Carberry, Manitoba. Together they raised six children. Jack's work as a telegraph operator and station agent took him and their growing family to Portage, Rathwell, Carberry, Altona and La Riviere where he eventually retired in 1985.
How fondly his children recall Jack's goings-on at the station house; the clickity-click of the telegraph as train orders were received; cheerful banter exchanged with ruddy-faced crewmen leaning on the wicket; the arduous unloading of freight onto large and unwieldy wagons; farmers arriving to collect flats of downy, peeping chicks and even crates of honey bees which sometimes escaped in the waiting room. On occasion Jack typed and hand-delivered telegrams. Whether it had been a distance birth or death, perhaps even congratulations from Buckingham Palace for a centenarian's special day, all were handled with requisite confidentiality and solemnity. At the end of those days which began before dawn, Jack put his feet up, a pencil still tucked behind his ear and listened to the CBC. In the office with bay window overlooking the railroad tracks, an old CPR wall clock quietly ticked away the fading light.
At Rathwell Jack was a Scout leader, built a small sailboat and took the children tobogganing and skating on the pond amid frozen cattails. He and Norma regularly Square danced at Hoedowns which were frequent events in those years. La Riviere provided skiing and canoeing but his long-held dream was to, "join the tumbling mirth of sun-split clouds".* After lessons at Brandon this goal of becoming a private pilot was realized. Jack joined the Manitou Flying Club and built a hangar for his Cessna at the community airport where he relished the camaraderie of aviator friends. There was little he and Norma appreciated more than a serene, summer morning flight to a Fly-In Breakfast somewhere in southern Manitoba. For a time after retirement from the CPR Jack flew his plane to various areas of the province where he repaired grain dryers. He and Norma enjoyed travel to Britain and Mexico. As well they wintered in Victoria where Jack renewed ties with his only sister Elaine and her family. Norma's death at 68 years brought sorrow and melancholy to the closing chapter of his sixth decade.
A new and joyous chapter began for Jack when he married Els Temmerman in 1999 and was warmly embraced by her large and lively family at Morden. Life was rich as they shared the milestone celebrations of their blended clan of children, grandchildren and great-grandchildren. Together they gardened, enjoyed Rainbow Stage productions and made visits to Europe, Mexico and British Columbia. In recent years, Jack and Els appreciated winter reprieves in Arizona at Pat's get-away.
Jack felt fortunate to have so many good-hearted people in his life and to have lived in a land of peace and plenty. In particular, being surrounded by the friends of Bill W. and Dr. Bob had long allowed him the grace to reflect and share laughter over many cups of coffee until he eventually arrived at a mellow and settled state, well-grounded in his own unique soul. Since he was not one for accolades, let it simply be said that Jack blessed the lives of many.
Surviving Jack are his wife Els, daughters, Denise (Glenn), Yvonne (Wayne), Lois (James) and Allyson, son Michael, stepchildren, Paul, Pat, Monique (Denzil) and Robert. Jack is also survived by a large complement of grandchildren and great-grandchildren whom he held dear. Jack was predeceased by his first wife Norma, his sister Elaine King (Tessier), his son John Rene Tessier, and stepson John Temmerman.
In this time of Covid 19, Els and the extended families would like to warmly acknowledge the kindness and support shown in so many ways by neighbours and friends. A public service is not planned.
Messages of condolence and memories are welcomed.

*High Flight - John Gillespie Magee, Jr.
"Oh, I have slipped the surly bonds of earth,
And danced the skies on
laughter-silvered wings;
Sunward I've climbed and joined the
tumbling mirth of sun-split clouds
and done a hundred things
You have not dreamed of -
wheeled and soared and swung high
in the sunlit silence.
Hovering there I've chased the shouting
wind along
and flung my eager craft through
footless halls of air.
Up, up the long delirious burning blue
I've topped the wind-swept heights
with easy grace,
where never lark, or even eagle, flew;
and, while with silent, lifting mind I've trod
the high untrespassed sanctity of space,
put out my hand and touched the face of God."