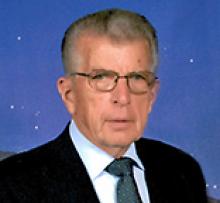 It is with great sadness that the family announces the passing of David Winter on September 22, 2020 at home in Winnipeg, surrounded by his family, at the age of 85 years.
Dad will be greatly missed by his wife of 49 years, Marilyn (Riediger) and his four children, Christine (Peter), Robert (Sheri), Frederick (Marlene) and Michael; as well as his grandchildren, Bridgitte, Erin and Elliott Jansen; Charles and Lily Winter; and Isabella, Abigail and Nolan Winter. He is also survived by one sister Tina Loewen (Peter); sister-in- law Helen Winter, sister-in-law Kay Winter, cousins, Frank and Nettie Winter; brother-in-law Ken Riediger (Carla), brother-in-law Barry Riediger, brother-in-law Nick Riediger (Libby), sister-in-law Helen Kasdorf (Ewald); numerous other cousins, as well as nieces and nephews.
He was predeceased by his parents, Frank and Anna Winter; brothers, Frank, Peter and John and sisters, Susan and Annie.
Dad was born September 1, 1935 in Neuenberg, Ukraine. When Dad was two years old, during the Stalin persecution of the Mennonites in the Ukraine, his father was imprisoned and executed. As the Second World War began, he fled Russia with his mother and siblings through Europe, mostly living in refugee camps, eventually coming to Canada on the Volendam ship in 1948 when he was 12. After coming to Canada, the family lived on a farm in Pigeon Lake, Manitoba. Dad worked on the farm in the summer and was able to go to school during the winter. At the age of 15 they moved to Winnipeg, where he dropped out of school to work full time to help support his family and learn English and history at night. He worked at Kruse Autobody and then Rich Brothers Autobody and learned the trade of collision repair on the job. Dad was baptized upon confession of his faith in 1955 at First Mennonite Church in Winnipeg. He was a member there his entire life and the church was very important to him. During this time, he also became a Canadian Citizen. At the age of 25, he started his own business, Winter's Auto Body, and then DMC apartments at the age of 38. His three sons made him very proud in continuing to grow the business.
Dad was a very hard worker, very determined and driven. He loved gardening and the cottage at Brereton Lake. He was a man of few words, never complained, and accepted his cancer diagnosis in September 2018 with grace and dignity.
The family would like to thank all the doctors at CancerCare Manitoba, and all the homecare workers who we grew to know as they helped with Dad's care over the last two years. Special thanks to Freddie who always went above and beyond to help him and became like a friend to the family.
A private funeral will be held with interment at Elmwood Cemetery.
In lieu of flowers, donations can be made to First Mennonite Church, CancerCare Manitoba, or Bethania Personal Care Home Spiritual Program.
Make a donation to