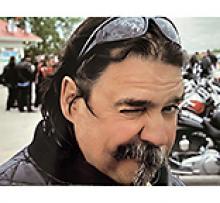 It is with profound sadness, we announce the sudden passing of Roger Leonard Young on Sunday, September 13, 2020. He had
always told me that if he had to leave us, he'd want it to be while he was riding, and he got his wish.
He was predeceased by his mother Jean Young; his father Leonard Young and his
sister Dianna Vowels.
He leaves behind his wife of 12 years, Janis Young (a.k.a Pete), his daughter Amber and granddaughter Ella, his son Tyler and granddaughter Hayden and grandson Deacon, his stepson Jakob (Kristina) and grandson Lukas, and his step son Sam (Ronald). He also leaves behind his three sisters, Kathy, Deanna (Gary) and Barbara, and his brother Michael (Sharon) and numerous nieces, nephews, and cousins.
Roger was born on June 14, 1956. He
started riding dirt bikes when he was 14 years old, so he'd been riding 50 years, he felt honoured to be able to brag about that. Riding his motorcycle was one of his greatest
passions in life, and he didn't let the weather, or even the snow, stop him! He started a
career in welding when he was 14 years old, and grew to become a master fitter welder. He spent 10 long, hard years up in the Arctic working for Purvis Navcon Shipyards. It was a hard go, but he wouldn't have traded the
experience for anything. He spent the rest of his career as a welder/ fitter/welding
supervisor in a variety of locations throughout Canada.
He was as passionate about his music as he was about his riding. He loved playing in front of a crowd, or around the fire, and he loved sharing his gift with others through his charisma and energy.
Roger impacted many lives in the riding community, the music community, the
tradesmen community, and, of course, in his family circle.
There will not be a service at this time. A celebration of Roger's life will take place in the future.