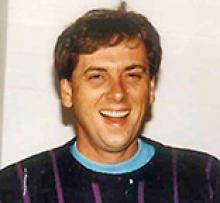 After a prolonged illness, we sadly announce Zane's passing on Sunday, September 20, 2020 at Tyndall House in Selkirk, MB.
Zane was born in Vita, MB to John and Sonia Dolynchuk. He had many happy childhood memories on his grandparent's farm (Wasyl and Doris Yarmie) in Tolstoi. He grew up in Winnipeg, graduating from Garden City Collegiate and earned his Bachelor of Arts degree at the University of Manitoba.
In 1976, Zane bought the H&R Block Franchise in Selkirk, MB. He successfully operated his business for over thirty years. During that time, Zane employed 46 people. He received several awards including "Top Franchise" for Western Canada.
Zane was hardworking, fun loving and always ready for a party. He enjoyed golfing, fishing and especially the Blue Bombers and of course, The Jets. Zane loved travelling and had many trips abroad including China, Nepal, Bahamas, Costa Rica, Puerto Rico and Belize. The year his son Bryce turned fourteen, the two of them toured Europe.
Zane was predeceased by his parents, John and Sonia. He is survived by his one son Bryce Brink-Dolynchuk; Bryce's mother Lois Brink; his sister Cheryl (Ervin) Kaziw; brother Randy (Melissa) Dolynchuk; nephew Dean (Nikki) Kaziw; nieces, Tara (Bryan) Martin, Dana (Curtis) Clarkson, Kianna and Leah Dolynchuk; great-nephews, Cash and Jones Clarkson and great-niece Sophie Martin.
Our family greatly appreciates the love and care Zane received from the more than wonderful staff at Tyndall House. Thank you so much.
Zane has been cremated and no formal service will be held. A private interment will be held at a later date.
If so desired, donations in Zane's memory may be made to the Canadian Diabetes Association.


"Miss you my brother, see you later."