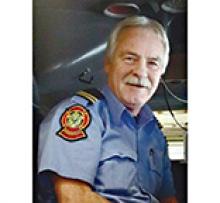 It is with great sadness that the family of Murray Wallace Jones, aged 67 years, of Winnipeg, MB, announces his passing on September 19, 2020, at St. Boniface General Hospital.
Murray was born August 9, 1953 in Winnipeg, MB. He grew up in Garden City attending Lord Nelson, Collicutt and Jefferson Junior High Schools, graduating from Garden City Collegiate. He excelled in a variety of land and water sports. He also had a great love for music, and played in many bands throughout the years.
Murray followed in his father's footsteps and joined the Winnipeg Fire Department on September 20, 1982. He had a long and rewarding career with the WFPS, retiring on January 11, 2015 as a Captain at #16 Station. Murray loved firefighting and always talked about how much he missed the guys after he retired.
Growing up, Murray spent his summers at the family cottage. As an adult he continued the tradition with his daughters. He loved being outdoors and took pride in the work he did rebuilding and maintaining the cottage.
Murray was a hard worker who knew how to joke around and he loved to laugh. He loved his family fiercely and could always be relied on for words of wisdom... even when we didn't ask. He enjoyed watching Winnipeg Jets, Blue Bombers, Blue Jays and Vikings games in the company of his friends and family.
Murray was a treasured father, son, brother, uncle and friend. He was predeceased by his parents, Wallace and Martha Jones. He is forever remembered by his daughters, Brittany (Daniel) and Jessica (Tyler), his sister Marlene (Nick), his nephews, Blair and Corey (Kelly), his great-nieces, Caitlin (Jeremy) and Kayla, as well as his great-great-niece Lilah.
In lieu of flowers, the family asks for donations to be made to burnfundmb.ca
A private family service to be held at a later date.