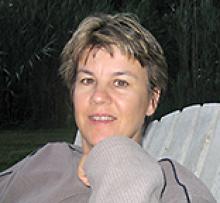 Evelynn passed away peacefully on Thursday, September 24, 2020 at her home, with her family by her side.
Evelynn is survived by her husband Brent and children, Chris (Tammy), Terri (Dan) and Gillian; grandchildren, Dylan, Mackenzie, Isabelle and Andrew.
Evelynn was predeceased by her father Hector (Pete) Desilets. Also left to mourn are her mother Marthe and siblings, Suzanne (Allan), Maureen (Ray), Norbert (Sherry), Odette and in-laws, Ian (Ruth), John (Bebe) and Lorne (Evelyn). Evelynn will also be missed by her many nieces, nephews and other relatives.
Evelynn was raised in Elie MB and after graduating high school, she commenced employment at Manitoba Public Insurance, where she started as an adjuster. In 1989, she was transferred to the Special Investigation Unit where she became an Investigator. Ev's expertise was auto theft investigation and identifying stolen and re-numbered vehicles and as such, she worked closely with the Winnipeg Police Service and RCMP auto theft units. Ev was extremely proud when she was declared an expert witness in vehicle identification by the Court of Queens Bench. Ev was also instrumental in the formation of the Central Canadian Auto Theft Investigators Association. She was very well regarded by auto theft investigators across western Canada.
After her retirement, her focus turned toward her grandchildren. She enjoyed taking them to Assiniboine Zoo and often had them over for sleepovers. She would find any excuse to spend time with and spoil them.
Aside from her family, Ev's passion was her stained and fused glass work. Over the years, she made many beautiful stained-glass pieces, many of which were gifted to friends and relatives. She had two kilns going seemingly non-stop at home and did some amazing fused glass work.
Ev retired in 2014, whereupon she and Brent wintered in Mesa and travelled through the USA and Canada in their RV. A highlight of Ev's retirement was their trip through the Yukon and Alaska with Ray, Maureen, Norbert and Sherry. Unfortunately, Ev's retirement was rudely interrupted in June 2018 by an unexpected cancer diagnosis, after which she spent the next two years undergoing treatments. Throughout all of the hospitalizations, tests, treatments and bad news, Ev remained strong and positive. She was truly an inspiration to us and her bravery was incredible.
Due to the times we are temporarily living in, a private funeral will be held. The funeral service will also be live streamed. In lieu of flowers, please consider making a donation to CancerCare MB, which will assist them in the research and treatment of cancer in this province. The family would like to thank her many doctors and caregivers from CancerCare Manitoba, as well as Brigitte Rémillard, Dr. Cornelius Woelk and the team at Southern Health Palliative Care.