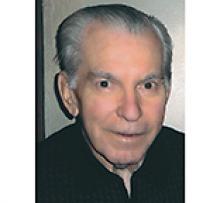 William Timothy Chandler was born December 21, 1925, and passed peacefully on September 19, 2020.
Bill is survived by his loving son Gary (at Luther Home); his sister-in-law Nel Chipka, and many nieces and nephews.
He was predeceased by his beloved wife Cecilia on December 23, 1988, sister Stephanie and husband Nicholas, brothers, John, Michael and sister-in-law Mary, and nephew Barry.
Bill grew up in the North End of Winnipeg, attended St. John's High School and United College. He worked for the City of Winnipeg, retiring as a building inspector in 1987. He was a proud lifetime member of the Masons, an avid Blue Bomber fan, played hockey, including a stint in England, and loved his cottage in West Hawk.
The family would like to express their sincere gratitude to the wonderful staff at Oakview Nursing Home.
In keeping with Bill's wishes a private graveside service has been held in his memory.
Should friend's so desire, donations in Bill's memory will be gratefully accepted by The Society for Manitoban's with Disabilities, 825 Sherbrook St., Winnipeg, Manitoba R3A 1M5.