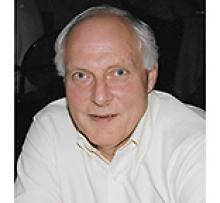 Family and friends regret to announce that Tom Dunn passed away suddenly and unexpectedly on September 8, 2020, in his 76th year.
He was predeceased by his parents, James and Ruth Dunn (née Lewis) and his brother Grant. He is survived by his partner, Maureen Blahut and family; his niece Nicole Dunn (Glen) and family; his sister-in-law Jodi Bolger (Dyrk); his best friend Peter McKelvey (Jillian) and family; and Peter (Ruth) Diamant. He will be missed by his close friend Milya Smith and family.
Tom graduated from the University of Manitoba with a B. Com., followed by his C.P.A. designation. He pursued a career as a chartered accountant (Clarkson, Gordon and Ernst & Young) culminating in his position as President and CEO of the Freshwater Fish Marketing Corporation.
He had many interests, in particular art, his farm and horses. He was an avid squash player and a long time member of the Winnipeg Squash and Racquet Club. He was always a gentleman and treated everyone with dignity and respect. He will be most remembered for his generosity and warm, hearty laugh.
As per Tom's wishes, there will be no funeral service.
Donations in honour of Tom's memory can be made to any charity of your choice.