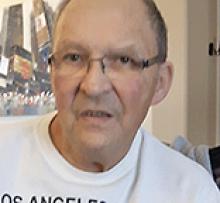 Peacefully on Sunday, September 27, 2020, Barry passed away in the late evening.
Barry was born in Sutton Surrey, England and came to Manitoba when he was three years old.
He is predeceased by his parents, Richard and Edith Law; his great-niece Morgan Paquin and great-nephew Jeremy Paquin.
He is survived by his sister Barbara (Greg); nieces, Tara (Ken), Meaghan (Tyler), Jennifer (Bill); great-nieces and nephews, Jessica (Addison), Aaron, Hunter (Montana), and little ones, Liam, Archer and Kashton.
Special recognition to his friend Florence Savard and amazing neighbours, Ryan and Amanda Hafenbrak.
Barry worked at CN Rail for 36 years, retiring in 1995. His passion was music and it showed with his extensive record collection and a 50s room full of anything and everything Elvis Presley!
He enjoyed going to garage sales, playing cards with his buddies. He played hockey for Earl Grey Community Centre. He always had a hockey or football game on TV and was forever a "Couch Coach". His favourite team was the Saskatchewan Roughriders and he attended the Grey Cup for many years. He also liked to travel with Hawaii being his favourite destination.
Barry had many friends; he knew someone wherever he went. He was incredibly generous and never missed a birthday, holiday, or important event for anyone.
He loved all animals and they loved him! He supported many of the animal rescues and always had a pocket full of dog treats.
As per his request, there will be no funeral.
In honour of Barry, donations to any animal rescue in Manitoba will be greatly appreciated.

"His song has ended but
the melody plays on."