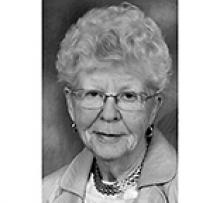 Doreen Routley, aged 86, passed away peacefully at Middlechurch Home of Winnipeg, with her stuffy, Buddy, tucked under her arm and faith in her heart. Doreen was determined (some would say stubborn) and wanted to do this her way after a courageous struggle with dementia that robbed her of her speech and an unfortunate fall resulting in a broken hip.
Doreen was born the baby of her family and was predeceased by her husband, Earl Keith Routley; her grandson, Steven Andrew Hurst; nephews: Kipp Watts, Jeremy Plint, Ron and Dennis Searle; brothers: Tom, Ken, Enway and Dave; sister-in-law, Beryl Watts; and brothers-in-law: Colin Plint, Harold Anderson and Bruce Routley. She was also predeceased by her lifelong friend, Margaret Sikorski.
She is survived by her son, David (Sharon); daughter, Karen (Don Hurst); son, Greg (Maureen); sister, Florence Plint; sisters-in-law: Queade Anderson and Anne Routley. Doreen was loved greatly by her grandchildren and great-grandchildren: Scott (Sandi), Lucas and Estelle; Heather Routley (Marlon Anderson) and Braden Routley; Katie Hurst (Keith Dyrda); Samantha (Ryan Kariakis); Sarah (Derick Selinger), Sophia and Emmett; her 'other' daughters: Brenda Foster and Shirley Harris; and by her many nieces, nephews and cousins.
Doreen loved to entertain and to feed people. She was a long-time member of Kildonan United Church where she served many years with the wonderful women of Unit 7 and more recently decided to become a member of North Kildonan United Church. She was welcomed there and set about making more friends.
Doreen left school early so she could go to work and help out her mom and dad. She worked as an egg candler, and as a parcel wrapper at Eaton's; her wrapping skills served her well in her life's journey. Doreen began working full-time with McKellar General Hospital in Thunder Bay, ON. She later moved to a position within the federal government at Transport Canada, first in Thunder Bay and then in Winnipeg. She held increasingly responsible positions with the departments of Agriculture including Assistant Director of the Grain Research Laboratory, and the Defence Research Establishment Suffield (AB). Doreen loved working. After receiving her GED in her 30s, she enrolled in Red River College and received her Business Administration Diploma; nothing could stop her after that. A highlight of Doreen's 25-year career with the federal government was the year she was a loaned as a representative with the United Way of Winnipeg. Upon retirement, Doreen became the kitchen mother at Beth Israel Synagogue. A short-term favour for her friend Rose Margovski evolved into a two-year stint that combined Doreen's passions of helping and making new friends, with feeding people.
Doreen loved to travel and enjoyed trips to the UK and Beijing, and annually to warm US resorts with her sister. She often travelled to California to see her brother, and all across Canada to visit with relatives and friends. Doreen's greatest wish was to travel to Zambia with her good friend, Phyllis Nachilongo, to meet Phyllis' friends.
Doreen was kind, generous, loyal, and loving. She collected and nurtured life-time friends throughout her school years, and in the different Canadian cities (Edmonton, Regina, Thunder Bay) where her husband, Keith's, career took them. Doreen will be remembered fondly for her unconditional love. She cared deeply for family, friends, and neighbours and especially for those who were less fortunate. She was always the first to offer help, regularly bringing meals to those who were sick or simply weary. Doreen was the kind of lady who called just to check up to see how you were doing or to sing that special song to you on your birthday.
Doreen was a West Kildonan girl and an activist like her mother. She began her activist undertakings by organizing a school walk-out when she was 13 because there were too many snow days and the principal at Centennial School decided to mark everyone absent so his grant wouldn't be jeopardized - but what was jeopardized was the students' perfect attendance record! Doreen and her fellow students won that battle. Doreen also worked to defeat Prime Minister Stephen Harper in the 2015 election. She had a sandwich board made and marched up and down Portage Avenue and Broadway handing out leaflets in Winnipeg to get out her message: "Bring Back Democracy, Defeat Harper." That action worked, too. Google her name and CBC and you can find out more and may be reminded of the little elderly lady with the sandwich board and the hat with the plastic flowers covering her white hair. She made the best out of her 15 minutes of fame and rumour has it a minister in town based one of his sermons on her efforts to sway the election results.
The family would like to express its sincere thanks for the outstanding care received at the Middlechurch Home of Winnipeg. Thanks also to the North Kildonan and Kildonan United Church families for the care and support provided to Doreen and her family. In lieu of flowers, the family suggests that donations in Doreen's memory may be made to the North Kildonan United Church (174 Pentland Street, Winnipeg, MB R2G 2S3), or the Main Street Project (661 Main Street, Winnipeg, MB R3B 1E3) or to a charity of your choice.
A private family graveside service will be held at Glen Eden Memorial Gardens, in conformation with the current Covid-19 status in Winnipeg.

"And when great souls die,
after a period peace blooms,
slowly and always
irregularly. Spaces fill
with a kind of
soothing electric vibration.
Our senses, restored, never
to be the same, whisper to us.
They existed. They existed.
We can be. Be and be
better. For they existed."

Condolences and memories can be shared by visiting Doreen's memorial page at seasons funerals.ca