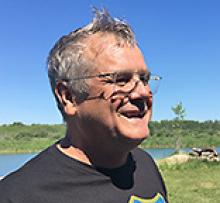 It is with deep sorrow that we announce the passing of Ian George Hodgkinson on September 29, 2020, one day after his 61st birthday.
Ian was predeceased by his father Hugh George Hodgkinson in 1993 and his son Steven George Hodgkinson in 2018. Left to cherish his memory is his wife Chrissie; "his girls" daughter-in-law Britney and precious granddaughter Brooklyn, as well as his mother Bernice and siblings, Dennis (Betty), Jill (Jim), Ted (Sherri), Tom, Joan (Frank), Hugh (Cheri) and Andrew (Na Lin); his mother and father-in-law Bev and Ed Chrisp and brother-in-law Grant (Laurie), as well as many nieces and nephews, great-nieces and great-nephews who were all very special to Uncle Pope.
Ian was born in Trinidad on September 28, 1959, the fifth of eight children. Their nanny nicknamed this beautiful little blonde haired, brown eyed boy Popo, which was Creole for baby, and as he grew older Popo was shortened to Pope. Ian was a very mild natured child and carried that throughout his life.
Ian wasn't only handsome he was handy. Some would even describe him as MacGyver. Ian was also a well-respected mechanic and people would often look to him for advice on what might be wrong with their vehicle.
A celebration of Ian's life took place on October 4, 2020, at "Frank Lake" (Joan and Frank's) in Erinview, MB, a favourite camping spot for friends and family.
Ian was dearly loved by all and will be greatly missed.