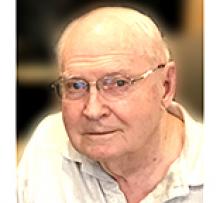 It is with heavy hearts that we announce the passing of Nelson on October 3, 2020, at the age of 88 years.
He will be sadly missed and lovingly remembered by Doris, his wife of 66 years, son Todd (Laura), daughter Lynda (Harold), and grandchildren, Shelby, Logan and Lu Le.
He was predeceased by his parents, James and Ruth Smith; son Blake; brother George, and sister Lorraine.
Nelson was born on January 29, 1932, in Morris, Manitoba. As a boy, he loved playing hockey on the frozen rivers around Morris. He became an accomplished player raising interest from the Winnipeg Monarchs hockey club. Ultimately, he chose a career with the Manitoba Telephone System starting in 1948. This is where he met Doris who was a switchboard operator. They both worked to maintain telephone service during the Flood of 1950. They married in 1954 and were transferred to Brandon a few years later. While in Brandon, their three children were born. The family moved back to Winnipeg in 1968 settling in the Westwood area of St. James. He retired in 1987 and made several lifelong friends during his 39 year MTS career.
Nelson was a quiet and modest man. He loved to putter around the house. His gardens were well kept and there were few things that he could not repair. He was an active member of the Telephone Pioneers, enjoyed playing some golf, travelling and the occasional trip to the casino with friends. He was enormously proud of his three grandchildren and loved to hear about their accomplishments.
Nelson lived his final years with Alzheimer's disease. The family would like to extend their appreciation and thanks to the staff of Oakview Place for their kindness and compassionate care over the last two years.
In accordance with Nelson's wishes, there will not be a funeral service. A private interment will take place at the cemetery in Morris.