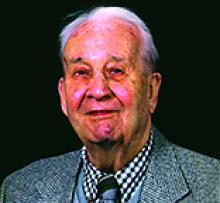 We are sad to announce the passing of Sidney Davis on October 2, 2020, at the age of 97 years, at the Grace Hospital.
Sidney was born in London, England on March 18, 1923. Dad had a very diverse and full life. He joined the Royal Air Force in 1940 and was sent to Canada for training as a navigator on Lancaster Aircraft. Following his training, flying along the Canadian and American coast, he went back to England to resume his wartime operations.
Dad immigrated to Canada in 1948 with his wife Doris and one year old son, Stephen. Dad and Mom settled in St. John, New Brunswick where he worked for the Irvings at their pulp mill as an accountant for eight years. In the years to come Alan (1949) and Brenda (1959) completed the family. In 1956 Dad joined the Royal Canadian Air Force as an Accounts Officer and was stationed at McDonald, Moose Jaw; Metz, France; and finally retiring at the base in Portage La Prairie in 1970 as a Captain. At that time Dad started another 18 year career with the Federal Government in Ottawa and Winnipeg and retired again in 1988, this time as Manager of Administration for the Department of Customs and Excise in Winnipeg. Doris died in 2004 and Dad moved into the Metropolitan Kiwanis Courts in 2011 where he felt very comfortable. He loved to tell jokes to his victims at the Courts.
Dad loved to build and fix clocks and watches and was always eager for a challenge.
Left to mourn his passing are his children: Stephen (Roslyn), Winnipeg; Alan (Rosemany), Calgary; Brenda (Don), Connecticut; grandchildren: Dereck, Amanda, Angie, Shannon, Matthew, Bronwen; and great-grandchildren: Adison, Lainey, Jade, Alexa, Lexie, Jaxon, Sophia and Cooper.
Many thanks to the staff at the Metropolitan Kiwanis Courts for their great support.
Cremation has taken place with a private family gathering to take place at a later date.


For those who wish to sign the online
Guest Book please visit www.chapellawn.ca