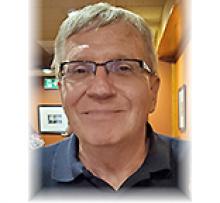 It is with great sadness we announce the passing of James (Jim) McEachern, loving son, brother, husband, father and grandfather. Jim passed peacefully with his wife, Diana, at his side.
He is survived by his wife, Diana (nee Hildebrand); their three children, Steven Prosser (Nicole), Laurel Ann (Andreas) and Robert (Michelle); and their three grandchildren, Dylan, Ava and Corbin; as well as his sister, Marlene (Lorne); and his brother, Tom (Roberta); plus numerous nieces and nephews, family and friends. Jim was predeceased by his parents, Robert and Doris McEachern; and his sister, Roberta.
Jim was born and raised in Elmwood, in Winnipeg, MB. He was fondly known as one of the nice guys. He met the love of his life, Diana, at Lester Beach, and had 19 plus wonderful years together. He was baptized and confirmed in 2003, and was a dedicated and helpful member of the Peace Lutheran Church. Jim was an avid sports fan and enjoyed our Jets, and since 1982 was a season ticket holder for the Winnipeg Blue Bombers. He was an active tennis player in his younger years, and later racquet ball. He always enjoyed nature, and dogs held a special place in his heart. Jim spent many years in sales with various companies over the years, and was still working with his daughter, Ann, at her company at the time of his passing.
The world is less bright with his passing, and yet better because of his kindness, humour and gentle ways. He will be greatly missed by all of us who loved him dearly.
There will be a private family service with an online link at www.peacelc.com on Tuesday, October 13, 2020, at 1:00 p.m.
In lieu of flowers, the family asks for a donation to Peace Lutheran Church, CancerCare Manitoba, or a personal charity.