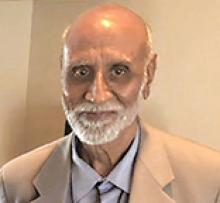 It is with great sadness the family of Jagpal Singh Johal announce his passing on Sunday, October 4, 2020, at the age of 79, in Winnipeg, Manitoba.
He will be lovingly remembered and dearly missed by his wife of 56 years, Mohinder; children: Donnie (Marla) and Tim (Sukhi); grandchildren: Riya and Sajan, Rasleen and Simrit.
Jagpal was predeceased by his parents, Bakshish Singh Johal (father) and Daljit Kaur Johal (mother); Hardev Kaur Dhillon (sister); and Surinder Singh Johal (brother). Survived by Davinderjit Kaur Atwal (sister).
He was born in Lahore, India on April 1, 1941, and moved to Canada in August, 1969.
Jagpal was very much a family man, and enjoyed travelling, roadtrips, exploring, fishing, and camping.
He was a school teacher in India before immigrating to Canada. He spent his early Canadian years working in Kamloops, BC and studying in Edmonton, AB. After getting his Bachelor of Education degree, he accepted a teaching job in Northern Manitoba. His Canadian career spanned 27 years as a school teacher and principal.
Jagpal devoted much time to the East Indian community. He was founding member of the Sikh Cultural Society Gurdwara in Kamloops, BC. He was a member and former President of Singh Sabha Gurdwara in Winnipeg, MB.
A private family service will take place later in the week.