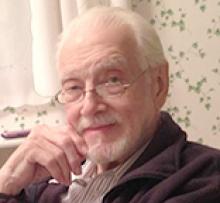 Early in the morning of October 9, 2020, in palliative care at the Riverview Health Centre, Albert Barnabé passed away at the age of 88 years.
He was predeceased by eight of his siblings and leaves behind his loving wife, Lilianne (Arsenault), son, Paul (Nicole), grandson Gabriel, daughter, Nicole, older sister, Denise Langlois, older brother, Roland (Charlotte), and younger sister, Thérèse (Georges Gosselin), as well as countless nieces and nephews.
Born the tenth of twelve children during the Great Depression, Albert knew what it was to live in want. At 18, struck by Crohn's disease, he nearly died. He had his first ostomy surgery on his twentieth birthday and remained grateful all his life for the care he had received from his revered mother, Emilia (née Champagne). The respect and care he showed for her in her later years were an example to his children.
Despite ongoing health problems, he went on to live a full life. He met the beautiful Lilianne Arsenault in 1963, and married her the following year. Over the next few years, his son Paul and daughter Nicole were born. He worked hard for many years to provide for his family so they would never know the want that he had experienced in his youth.
Albert's passions also included carefully tending to the yard and garden of the house in which he lived for almost 60 years. In later years, he would be able to exercise this passion with the invaluable support of his dear friend and nephew, Denis Collette. He loved music, especially classical, and listened to it from his favorite chairs in the living room of his house, basement woodcarving studio, and the living room of the apartment in which he spent his final years. After retiring from CNCP Telecommunications, he produced many beautiful and whimsical carvings in his studio and gave them to family members.
He was a playful and tender-hearted man, who showed his love quietly. Albert was deeply appreciative of his wife's tenderness and care, and he loved her very much. He once gave CPR to a little black mouse that his young daughter Nicole had smuggled into the house as a pet because he knew that she would be heartbroken at its death. His grandson Gabriel's favourite memory is of a day spent together, sitting on the swing building toys from chocolate Kinder eggs, and later enjoying ice cream bought from a truck.
During his frequent hospitalizations, he was unfailingly courteous and kind to everyone around him, often more concerned with their well-being even before his own, and expressing his appreciation to everyone. His family would like to echo that appreciation at this time, in gratitude for Albert's long and fruitful life.
Due to the pandemic, interment of the ashes has been held privately at Green Acres Cemetery.
In lieu of flowers, donations may be made to the Winnipeg Ostomy Association http://ostomy-winnipeg.ca/donate-now/.
The family is very thankful for the outpouring of love and support from friends and family.


Albert passed away peacefully at Riverview.
He leaves behind his loving wife Lilianne (née Arsenault), son Paul (Nicole), grandson Gabriel, and daughter Nicole.
Donations to the Winnipeg Ostomy Association (http://ostomy-winnipeg.ca/) are requested in lieu of flowers.
A longer obituary for this wonderful, kind man will follow.
Publish Date: Oct 10, 2020