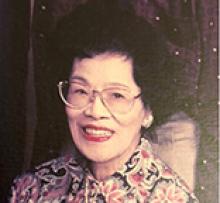 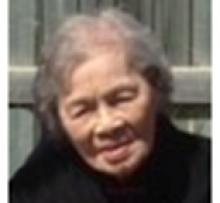 Mrs. Pak (aka, Pat) Hang Lee peacefully passed away on October 6, 2020, at Parkview Place Long Term Care Home in Winnipeg, Manitoba.
She is survived by her two sons, Albert Garland Lee and Edward Henry Lee, Henry's wife, Martha, a grandson, James, and his wife Alex, a granddaughter, Patricia, her husband Romain and a great-grandson, Gabriel. Pak Lee was born on October 24, 1917, in Foochow City, Fujian Province, China. She married Mr. Sam Ming Lee in Hong Kong in 1952 and moved to Winnipeg.
Over more than ten decades, Pak Lee experienced a varied career, first as a primary school teacher in China, starting in 1938, then going to work at a bank with her eldest brother, Mr. Chan Pak Ha and #seven sister, Ms. Chan Pak Woo in Canton, China in 1948, working as a high school librarian in Hong Kong, returning to being a primary school teacher and education administrator in Hong Kong in 1951, owning and operating a grocery store in Winnipeg, then owning and operating Oscars Restaurant in Selkirk, with her husband Sam Ming Lee, and finally working as a waitress at several different restaurants in Winnipeg from 1972 until she retired in September, 1984.
Pak Lee had a fervent desire to help others and was always generous to those in need. Her kindness, caring nature and generosity enriched the lives of all who met her and gained her many friends. She made life-long friends, starting with some students from her time as a schoolteacher in Fujian province in the 1940s, who continued to send her Christmas cards and gifts every year. Pak Lee devoted many hours, especially after her retirement, to helping seniors in the Chinese community in Winnipeg such as by acting as a translator and liaison for Chinese seniors who do not speak English to access social services. Through her activities in helping other Chinese seniors, she met people who came to know and love her a part of their extended families.
In her retirement, Pak Lee also participated in the Winnipeg Chinese Senior Club where her honesty, kindness, sincerity, and loving others as her own, made many friends. While she eventually stopped participating in the Winnipeg Chinese Senior Club events, she continued to talk to her many friends on the phone. Pak Lee enjoyed spending her days reading the bible and newspapers, watching Chinese shows on TV and reminiscing on her experiences to her friends and relatives. Her stories were a source of joy and entertainment for her friends and relatives.
Pak Lee's honesty, kindness, and sincerity was reciprocated by many friends who willingly helped her with her grocery shopping, visits to the doctor, chores around the house, etc. For some of these friends, Pak Lee became a part of their extended families and they mutually enjoyed each other's company. She expressed her happiness with members of these extended families (Shelby McLeod and husband Bruce Kent and Lori Abbott and husband Michael Whelan and Lori's sons Reed and Nolan) by celebrating their birthdays and anniversaries and providing gifts at Christmas.
Now, Pak Lee rests in peace, knowing she had a warm and vibrant life. She has gone to join her late husband. She left no regrets on earth and wished her children, grandchildren, and great-grandson to be happy for her.
The family asks that anyone who wants to remember Pak Lee, do so by making a donation to a charity in her name, rather than sending flowers, wreaths or "li she".