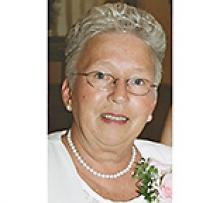 With deep sadness we announce the peaceful passing of our beloved mother and grandmother, Tannis Johnston.
She will be sadly missed by her loving daughter, Christine and husband Dale, son James, and grandson Christopher. Mourning her also are ex-husband Ken; in-laws Lorraine and Lorne, Violet and Fred, Marjorie and David, and Elaine. Lovingly remembered by cousins Terry and Penny, Judy and Eugene; as well as several nieces and nephews, and many friends.
Tannis was predeceased by her parents Charles and Helen Thorpe, her brother Charlie, and brother-in-law Ron.
Tannis was born and raised in St. Vital, and graduated from Glenlawn High School. She was fortunate to retain a lifelong friendship with Denise and Brian Holloway, who were schoolmates at Glenlawn. Cousin Terry and wife Penny also grew up in the same area and their friendship, especially in the past year, meant so much to her. She was always happy to share her childhood memories of growing up on Kingston Crescent.
Tannis had a career with the Royal Bank in the mid-sixties and seventies. It was there that she met Ken, to whom she was married for over 30 years. Their children Christine and James were raised in Charleswood. When her children were young, she ran a daycare in her home for several years.
Tannis was an excellent mother to her children and were the focus of her life. Her extra dedication to James and his needs demonstrates how gifted she was as a mom. There was a special group of neighbors on Donnington Road who were usually available for coffee. They opened their doors to James when he was little, and he knew where everyone's vacuum cleaner was. Thirty-five years later these neighbors continue to support and encourage him. That meant everything to Mom. We had a swimming pool and she enjoyed sharing it with the neighbors and their children. Mom also supported us through life's challenges.
Later, Tannis spent most of her working years at Westdale Junior High School as an Educational Assistant, as she had a special interest in helping children with a variety of challenges. She enjoyed her work and her co-workers very much. As a person, she was kind, easygoing and compassionate.
Tannis enjoyed the sunshine and she was the most tanned person around. Mom loved Victoria Beach and took day trips there when possible, and sometimes rented a cottage with the family for a few weeks. She enjoyed golf with her friends, word puzzles, Sudoku, and the casino in later years. During her life she visited western Canada many times, and in her retirement, she was able to enjoy trips to Las Vegas, Cuba, Mexico and a cruise along the Canadian East Coast.
The family would like to thank the dialysis team at St. Boniface Hospital, Sturgeon Creek 1 Seniors Residence, and Marilyn Barkley from Comfort Keepers for their support during the time of Tannis's declining health, as well as close friends Lynda, Carol and Peggy.
A private family service will be held at a later date.
In lieu of flowers, donations may be made in Tannis's memory to SCE Lifeworks, 227-530 Century St. Winnipeg, MB, R3H 0Y4 or to Manitoba Down Syndrome Society, 204 - 825 Sherbrook St., Winnipeg, MB R3A 1M5.