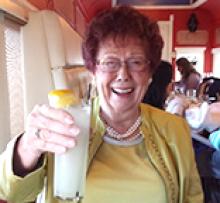 It is with deep sadness that we announce the passing of Aline Mousseau (Roy) on October 7, 2020 at the age of 92, after a four-year struggle with dementia. The eldest of six children, Aline Anita Roy was born in St. Boniface (now Winnipeg) Manitoba to Thérèse and Raymond Roy. She was predeceased by her husband Paul in 2006, her parents, and siblings Philip and Jeanne (LaRocque). She will be greatly missed by her children Diane, Louise (Glen) and Denis (Rhonda) and four grandchildren Renée, Evan, Dayle and Jared. She is also survived by her three siblings Lorraine Toews, Denise (Andy) Gavine and Robert (Jennifer) Roy. She will also be fondly remembered by many family members, and her nieces and nephews who all loved their "Ma Tante Aline".
Aline and Paul were raised in St. Boniface about four streets apart. Paul joined the army during the Second World War and was stationed in Alberta guarding German prisoners of war. They began corresponding during the war and fell in love. Married July 16, 1949 at St. Boniface Cathedral, they enjoyed a long and happy marriage of 57 years. Aline was a stay at home Mom until Denis started school. She then went to work at Ebbeling Pharmacy part time, which led to a long career at the St. Boniface Clinic Billing Department, Revenue Canada, Fashion 220 Cosmetics and White's Foods.
Bowling was the sport of choice in the family. Paul was a champion 10 pin bowler who broke many records for high single and high triple. He was inducted into the Manitoba Bowling Hall of Fame in 1995. Aline bowled 5 pins in a women's league at Coronation Lanes for about 20 years. Paul convinced her to try 10 pin bowling so that they could bowl together in mixed league with their best friends. Aline found her calling and soon was one of Manitoba's top women 10 Pin bowlers for several years. After bowling, Aline and Paul spent many afternoons at the LaVérendrye Club playing cribbage and whist.
Aline loved music and her favourite performer was Engelbert Humperdinck with Frank Sinatra a close second. She enjoyed attending the Jazz Festival, Folklorama, concerts at the Centennial Concert Hall, and Club Regent. Paul and Aline loved to dance and jived particularly well! They could always be found on the dance floor at many weddings, socials and New Year's parties.
We would like to thank all the medical professionals and care givers at Intercare Southwood Care Centre in Calgary for their excellent care and support. We are forever grateful.
Due to Covid-19 restrictions, a private Celebration of Life will be held in Winnipeg in 2021.
If you wish to make a memorial donation, please consider the Alzheimer's Society of Canada at https://alzheimer.ca/en/take-action/donate.

Messages of remembrance may
be left for the family at
www.southcalgaryfuneralcentre.ca