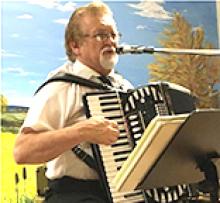 It is with great sadness that we announce the sudden passing of our dear husband, father and grandfather (Gigi) at the age of 73, October 10, 2020, at HSC Hospital with family by his side.
Nestor is survived by his beloved wife, Linda of 48 years, daughter, Elisha Mitchell (Chris), son Kris, granddaughters, Hailey and Kensey, sister, Iris Buchel, brother, Orest (Helen) and pets Kola and Oreo.
Nestor was predeceased by his parents Alec and Anne Shydlowsky, brother-in-laws, Tony Buchel, Adam and Maurice Salamandyk.
Nestor was born and raised on a farm at Tolstoi, MB on November 14, 1946. His passion was playing accordion, singing and to form a Ukrainian band.
By 1968, Nestor's dream came true when he started Royal Polka Kings who toured and recorded six albums.
During this time, Nestor found his love Linda and married in 1972. In the late 1970s Nestor formed the group Family Love. His final band was the Ukrainian Oldtimers who toured Western Ukraine in 1999, Western Canada and performed many Ukrainian Festivals including Dauphin Ukrainian Festival for the last 30 years. Nestor and the band also recorded 30 albums.
In 1974, Nestor opened up his own Recording Studio and record labels, Sunshine Records and Baba's Records. During his busy life Nestor enjoyed farming and most of all spending quality time with the family.
Nestor was an outstanding entertainer and family man who will never be replaced.
We will love you forever.

Many thanks to Selkirk Hospital and HSC for their care and compassion.
In lieu of flowers, please contribute to the GoFundMe page https://gf.me/u/y4n5if
A private family service will be held due to Covid.