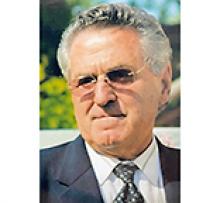 Donald Joseph Masson of Ste. Rose du Lac, Manitoba passed away on Tuesday, October 6, 2020, at the St. Boniface Hospital in Winnipeg, at the age of 84 years.
Don was born on July 27, 1936 in Virden, Manitoba, to parents Adelard Joseph and Marie Anna Masson (nee Dumont), and was raised on the family farm south of Oak Lake, Manitoba, with his siblings, Ronald his twin brother, Marguerite, Paul, Henri, and Ernest. Don attended Grade Clairiere Catholic School, and later St. Charles School in Winnipeg. In his younger years, Don worked on various oil rigs in Saskatchewan and Alberta. In June of 1961, Don married Carole Deleau of Deleau, Manitoba, and together they raised three children, Bradley, Myles, and Treena. In 1964, Don accepted and excelled as a farm implement salesman in Swan River. In 1966, Don and his family moved to Ste. Rose to start his first implement dealership. After a few years, he was fascinated with the cattle industry, and became an auctioneer. In 1978, Don founded and built the Ste. Rose Auction Mart on Highway 5 just south of Ste. Rose, and achieved further expansions of the business. Don was a determined and successful businessman, who connected well in the community and with customers throughout the cattle industry. He received his pilot's license in the late 1980s, and enjoyed flying his Cessna (Glassair R2G) airplane. Family gatherings, travelling in his motorhome, and cooking a great steak were all things Don looked forward to.
Don was predeceased by his parents, Adelard and Marie Anna; and his twin brother, Ronald. He leaves to mourn his passing and cherish many fond memories: his children, Bradley Masson (Connie), Myles Masson (Cindy), and Treena Masson-Milmine (Glenn); his grandchildren, Ashley, Taylor, Lindy, Courtney and Sophia; his siblings, Marguerite, Paul, Henri, Ernest; their spouses; his former spouse of 43 years, Carole Masson (Deleau); along with numerous nieces, nephews, and many friends.
A family graveside service was held for Don on Saturday, October 10, 2020, at 2:30 p.m., in the Ste. Rose Cemetery in Ste. Rose du Lac. Fr. Patrick Neufeld officiated. A celebration of Don's life is being planned for a later date.
The family would like to thank the doctors and nurses at the Acute Critical Care Unit of St. Boniface Hospital for their outstanding care and exceptional compassion shown to the family.
Should friends so desire, donations may be made in memory of Don J. Masson to the St. Boniface Hospital Foundation, 409 Tache Avenue C1026, Winnipeg, MB, R2H 2A6, or the Ste. Rose Jolly Club, PO Box 376, Ste. Rose du Lac, MB, ROL ISO, where he loved socializing and playing pool.
Don was well liked by all who knew him, and loved to tell stories, especially at holiday family gatherings.