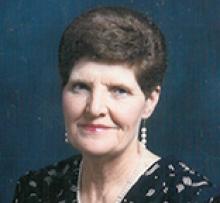 Peacefully surrounded by her family, Dorothy Chrismas passed away on Thursday, October 8, 2020.
Remaining to forever cherish Dorothy's memory are her daughters, Judy (Joe), Diane (Herb), Gail (Alan), Carol (Bo), Bonnie (Mark) and Sandy (Rick). Also left to cherish her memory are her 13 grandchildren, 27 great-grandchildren, sister, Shirley, sisters-in-law, Muriel and Violet; as well as numerous nieces and nephews and extended family.
She is predeceased by her brothers, Alec, Gordon, Billie, Wesley, and David and sisters, Joyce, Bessie and Vicky.
On January 14, 1931, Mom was born in Winnipeg, Manitoba, the oldest daughter of Beatrice and Harry Laing. She lived and worked in Winnipeg as well as on her aunt's mink farm in Vivian. In 1950, Mom married Dad and they settled in Winnipeg, where they had three daughters, Judy, Diane and Gail.
In 1958, the family moved to Balmoral where Carol, Bonnie and Sandy were born and this completed her family. They started out with a mixed farm but soon found poultry was their passion. Mom worked as hard as any man on the farm and was proud of all they accomplished. She also owned and ran the Balmoral Snack Bar. Being a great cook, she was famous for her pies.
Mom and Dad also built a hog barn and she was right there helping with everything. Sundays were especially important to her, when all her children and grandchildren came for dinner. Mom showed her love with food so no one ever left her house hungry. She spoiled her grandchildren making sure there was always Pick-A-Pop in her house. During her life in Balmoral, and then later moving to Stonewall, she met many lifelong friends whom she cherished.
In Stonewall, Mom became a proud Legion member and helped in the kitchen as long as she was able.
Mom was known for her generosity including sending cookies to the church, taking a turkey to the Bomber games and helping any person in need. She was an avid fan of the Blue Bombers and Winnipeg Jets. The family knew not to visit when a game was on.
Mom lived in her own house right until the end which made her very happy.
On Saturday, October 10, 2020, as per Mom's request a private family service was held at the Victoria Church Cemetery.
Pallbearers were: Joe Stefanuk, Alan Schick, Mark Yeomans, and Rick Whittom. Honorary Pallbearers were grandsons , Richard Thomson, Bo Yeomans and sons-in-law, Herb Menzel and Bo Sweeney.
In lieu of flowers, if friends so desire, donations in memory of Mom may be made to the Balmoral United Church, Box 115, Balmoral, Manitoba, R0C 0H0.