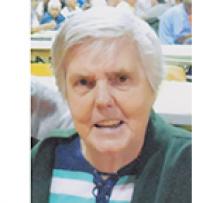 After a long battle with the dreaded Alzheimer's disease, Jackie succumbed on October 12, 2020.
Jackie was born on September 16, 1930 in Winnipeg, MB. Jackie recently celebrated her 90th birthday, as well as her 65th wedding anniversary on September 2. Jackie was adopted very young. Her new father was a Regimental Sergeant Major in the Canadian Army Medical Corps and therefore he travelled frequently away from home. Jackie's mother was not the kindest person, telling Jackie often that she "would never amount to anything." Jackie throughout her life, would strive to prove her mother wrong.
In school, Jackie became friends with another student, Eva Sutherland. This friendship remained very important throughout Jackie's life.
Jackie had a good mind for mathematics and after grade 12, worked at Great West Life. Following that, Jackie went to London, England and worked for Union Canton Insurance. Jackie returned to Winnipeg and on September 2, 1955, Jackie married Jerry South. Then in order came Jim, Janet and John followed by granddaughter Brittany. When in Morris, Manitoba, Jackie began learning taxation and later in Winnipeg, joined Revenue Canada Taxation. Jackie rose through the ranks and successfully became a leader. Jackie was helped through this by joining International Toastmistress. While at Revenue Canada, Jackie became Union President. Jackie mentored a lot of her staff and was loved and admired by many.
Jackie and Jerry moved to Fred Douglas Place in Winnipeg, after 25 years in Oakbank, Manitoba. Jackie enjoyed a number of years at Fred Douglas Place. Jackie became afflicted with Alzheimer's and resided in Lions Personal Care Center for numerous years, until her passing. Jackie received very good care at Lions Personal Care Centre, for which her family is very grateful. They give their sincerest thanks for their goodness to her.
Due to the pandemic and the limit of 10 people for gathering, a small private service of worship will be held with a more open service at a later date.
In lieu of flowers, a donation could be made to Winnipeg Harvest.