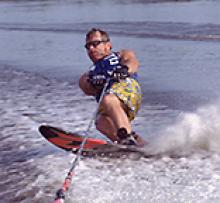 It is with heavy hearts and profound sadness that Barry's family announces his passing on October 5, 2020, at the Health Sciences Centre, at the age of 70.
Barry had a larger than life personality - he was always lending a hand, never waiting to be asked. There was no trying for Barry. He simply did - with enthusiasm, persistence and tireless energy. He succeeded at everything he put his mind to, both professionally and as a volunteer. He loved coaching and managing his kids' sports teams, whether it was soccer or hockey, and he was everybody's waterski coach!
He reserved most of his seemingly endless energy for his family. They meant everything to him. He was at his happiest when all of them were at the family cabin together. He particularly loved all of the big, noisy extended family gatherings around holidays and birthdays.
You are unlikely to hear of a more varied career than Barry's. He spent several years living in St. Maarten working as a waterski instructor, and then as a cruise director on several Cunard ships. He loved his time as Executive Director of the Winnipeg Symphony Orchestra, and was very proud of helping to create and establish the New Music Festival. He was also the President and General Manager of the Vancouver Symphony Orchestra, where he conceived of the idea to host a giant orchestral concert in BC Place. Comprised of 10,000 music students from around the province and the VSO, this was a stunt that allowed them to enter the Guinness Book of World Records as the largest orchestra ever, as well as to bring major awareness to the importance of music education in schools.
Barry had an ardent love of fundraising (and he was very good at it), which manifested itself in his work at both the CancerCare Manitoba Foundation, and most recently, at the Jewish Federation of Winnipeg's Combined Jewish Appeal where, as the volunteer chair, he was able to facilitate the fundraising of $6,005,206.00. At CCMF, he was responsible for bringing the Weekend to End Breast Cancer, the Challenge for Life, and the Inside Ride for pediatric cancer to Manitoba.
One of his proudest achievements at CCMF was bringing the Bears on Broadway to Winnipeg. Pairing local artists with sponsored concrete bears, it was both a fundraising and artistic success, and has continued to bring joy to everyone who sees the bears.
If you knew Barry, you know how much he loved waterskiing. He was heard to say many times this year that, at 70, he was skiing the best he had ever skied in his life. His community at both Betula Lake and Indio, California were extremely important to him, and he thought himself very lucky to have such terrific friends and neighbours that he considered as family. Barry was especially proud to be a member of the SLOGs (Slaloming Old Guys) of Betula's Block 2.
He is survived by his wife, Carol (nee Blankstein); their children, Ian (Steph) McArton and Sydney (Graham) O'Bray; and his two wonderful grandchildren, Teddy and Rowan; as well as the McDonald, Lloyd, Trickey, Young, Stewart-Jones, Blankstein, Olenick and Rady families. He was predeceased by his dad, Harry; his mother, Marjorie; his father-in-law, Morley; and his nephew, Garreth.
Thank you to all of the incredible people on G4, G7 and the ICU at the Health Sciences Centre for taking such extraordinary care of Barry. And thank you to those at CancerCare Manitoba who made it possible for Barry to live a full and active life with us for the past eight years. We are so very grateful.
A Celebration of Life will be held when larger gatherings are permitted. We look forward to hearing your memories of our dear Barry. In the meantime, Barry would've loved for anyone who wants to celebrate his memory to put on "Cheeseburger in Paradise" by Jimmy Buffet, and enjoy an ice cold Stella.
In lieu of flowers, donations can be made to CancerCare Manitoba Foundation's Precision Oncology Program (www.cancercarefdn.mb.ca) or a charity of your choice.

Barry, you left nothing on the dock.
Thank you.