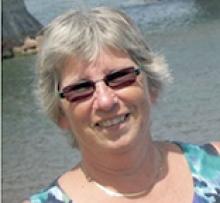 Linda Anne Hanlan, age 68, Truro, NS, passed away on October 11, 2020, after succumbing to a three year battle with cancer in the Palliative Care Unit in the Colchester East Hants Health Centre, Truro, NS, with loved ones by her side. Born on March 14, 1952 in Winnipeg to the late William and Teenie (Stojak) Billows of Winnipeg.
Linda is survived by her loving husband of 36 years, Ernie Hanlan; stepsons, Chad Hanlan; grandchildren, Dillon, Hunter and Avery of Pine Fall, MB, Brent Hanlan (Leanne), grandson, Beau of Winnipeg, MB; stepdaughter Susan (Morley) Hobby; grandchildren, Jamie, Jennifer, AB; special niece Liz Thompson (Ted Martin), North River, NS; sister Carol Strike of Winnipeg, MB; goddaughter Corissa of Chilliwack, BC; brothers-in-law, Gerald (Betty) Hanlan, AB, Eric (Diane) Hanlan, Winnipeg, MB and Curtis (Terry) Hanlan, Crowes Mills, NS; sisters-in-law, Doreen Roode (Doug Gratto), Truro, NS, Marie (Jacgues) Cloutier, Moncton, NB, Mildred Hanlan (Pierre Lynds), Truro, NS; several nieces, nephews, and cousins.
Besides her parents, she was predeceased by brother-in-law Joe Strike; in-laws, Gerald and Edith (Kirk) Hanlan, West Pennant, NS; and sister-in-law Betty Ford, PEI.
Linda began working at an early age at the A&W as a Car Hop. In 1975, she left to follow her career at Manitoba Telephone system, a job she enjoyed up until her retirement in 2006. Some of her hobbies included golfing, gardening, crocheting and walking.
In retirement, Linda and her husband Ernie enjoyed many years of RVing with their group of 5th wheeling Amigos. She loved to travel and cruise the seas.
After touring the province of Nova Scotia in 2007 they returned home to Winnipeg. Linda could not let go of the feeling she had for Nova Scotia. It just felt like home to her. In 2008, they bought a home in Truro where they would spend their summers, while spending their winters in Mission, Texas, another place that became dear to her heart. During those years they made many friends whom she referred to as her Texas family.
She will always be remembered by her family and friends as a weather forecaster. She loved to follow the weather patterns. Friends and family could always rely on her for all the weather updates. She often said, "I should have been a meteorologist."
We would like to offer our sincere gratitude to the amazing staff of the Palliative Care Unit at the Colchester East Hants Heath Centre, Truro, NS, and the Oncology group in Truro, NS, as well as Halifax, NS, who gave such great care to Linda and for the kindness shown to her family over the past three years. It was greatly appreciated.
No visitation or service by request. A private Celebration of Life will be held at a later date.
In lieu of flowers, donations may be made to the Palliative Care in the Colchester East Hants Health Centre.

Online condolences may be sent to the family
by visiting www.ColchesterCommunity.com