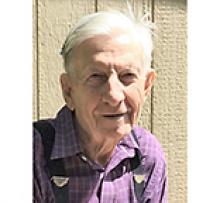 Surrounded by family, Ivan passed away peacefully at Misericordia Place on October 7, 2020, following a life well-lived.
Left to mourn the loss of Ivan are his children, Doug (Rosemary), Hugh (Mari), Stephen (Colleen), Blair (Wendy) and Linda. His grandchildren, Ben (Leanne), Alex (Michelle), Amanda (Graham), Julia (Trevor), Josh, Nikki, Dane and Faith will miss him and the positive influence he had on each of them. He also left his loving great-grandchildren, Charlotte, Emma, Ayla, Elsie, Juniper, Phoebe, Calvin and Reid.
Ivan was predeceased by his loving wife, Margaret, in 2013.
Son of Sandy and Nellie Bonner, Ivan was born May 4, 1927 in Roland, Manitoba. He grew up with his four siblings helping out on the family farm. The family left the farm after a number of years, and moved into Winnipeg. It was here that he met Margaret, the love of his life, who he married in 1954. They moved into their house on Buxton Road in Fort Garry where they raised their five children. Ivan and Margaret made friends wherever they went. After they left their home on Buxton Road, they moved to Appleton Estates, and then The Waverley where they fostered many new friendships.
Ivan had several careers, first starting a plumbing company with his brother-in-law, Ken, and then moving on to become a successful sales representative for several fiberglass and plastics companies. Always the entrepreneur, his last career involved helping start a successful plastics company, Westland Plastics, with several other investors.
Ivan was a dedicated father whose focus was his family, all of whom he was immensely proud. Ivan's love of children became more evident when he and his sister, Dora, joined the Cub Scouts of Canada. Many a Fort Garry lad will remember him as Akela, the leader of the Fort Garry United Church wolf cub pack. With a loud "Akela! We'll do our best with a dyb dyb dyb dyb and a dob dob dob dob".
Ivan's biggest passion was the family cottage at Nutimik Lake in the Whiteshell Provincial Park. From the beginning it was always a labour of love, starting with building the first cottage by hand with the help of friends and relatives in 1954, far from civilization. In the 1980s, Ivan built a new cottage with the help of family and friends to make a more comfortable, all-season cottage to allow the addition of winter activities. Ivan was always most comfortable at Nutimik Lake surrounded by his family and the beautiful natural scenery. He enjoyed fishing, and his favourite moments were taking his children and grandchildren out in the boat to teach them how to bait a hook and land a fish. He was legendary for his 45-gallon drum smoker which he fired up when he had accumulated enough goldeye to make a smoker run worthwhile.
Ivan "Torpedo" Bonner was excited about all things speed related, whether for himself or his kids, he was always encouraging endeavours that were bigger, higher, and faster. If his kids were interested, he would make it happen. Over the years this involved snowmobiles (many of which required numerous repairs and replacements), minibikes and on to motorcycles, hydroplanes (hand built), bathtub racing (designed and hand built by Ivan), hang gliding (requiring a special purpose reinforced boat, again hand built by Ivan), and the list just continued on and on. He also enjoyed travelling to rural Manitoba to visit members of the Campbell and Sim families for the fall hunt that reminded him of life on the farm.
His success in life was grounded in his strong sense of honesty, integrity, and developing trusting relationships through a sense of caring humour. This left anyone he met or talked to smiling and feeling uplifted by the meeting, and led to his successes in business. He was a legendary story teller who, from his youngest years onwards, had many adventures and misadventures to share with whoever had an interest in the unorthodox and unusual things Ivan had done or tried in his life. He is the last of his era, and will be sadly missed by everyone in his family, and all those who were part of his life
The family would like to acknowledge the staff from the Misericordia Place Personal Care Home for their compassionate and caring attitude during his time there.
In lieu of flowers, Ivan would have asked for donations to be made to the Children's Hospital Foundation of Manitoba, to care for kids now and ensure their healthy future.
Funeral arrangements have been made through Chapel Lawn Funeral Home. Due to the ongoing pandemic, a service celebrating Ivan's life will be held in the future when conditions are more favourable.