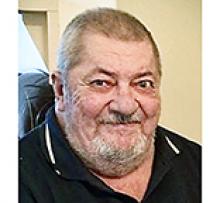 It is with heavy hearts, that we announce the passing of the most loving husband and father, Dennis, aka "The Judge" and "Uncle D". He passed peacefully on October 11, 2020 with his family by his side.
Dennis will be forever remembered by his loving wife Carol, and daughters, Shaelynn and Tyla. He is also survived by his brother Tony, sister-in-law Alice and many nieces and nephews and their families. He was predeceased by his parents, Alex and Helen, in-laws, Fred and Lavina Cole, brother Rudy, sister Alice Pagee, as well as brother and sister in-laws.
Dennis was raised on the farm in St. Martin, MB. He left for Hudson Hope, BC at the end of his schooling, then later returned to work at Burns Meats in Winnipeg, MB. He met and married the love of his life Carol on September 11, 1971. They made their way to Weyburn, SK to help manage the Weyburn Hotel and later returned to St. Martin to help out on the family farm. Dennis began working at the power plant at CFB Gypsumville prior to becoming a business owner and taking over the St. Martin Solo Store. During this time he was bestowed with the honour of becoming a Magistrate in and for the province of Manitoba, a role he cherished for 23 years. Dennis was also a butcher at Rawluk's Grocery Store, where he continued to showcase his passion for connecting with community.
Dennis was well known for his love of cooking, BBQing and making smoked fish. He will be remembered for convincing many to try headcheese and for being the best chili cook out there. He was an avid Winnipeg Blue Bomber fan and was overjoyed to see them win the Grey Cup one more time. Dennis had a heart of gold and was a friend to all. He would give his last dollar to make anyone's day a little easier. He enjoyed going for airplane rides with his neighbour, visiting with friends, and hosting get togethers with his business staff and RCMP family. He had a love for snowmobiling and going for quad rides, ice fishing, spending time at Maple Beach, and swapping stories with neighbours and friends. Dennis cherished his connections with the surrounding First Nations and was well respected by the entire community and all those who had the pleasure to work with him. In his final years he dealt with chronic illnesses that he was not able to overcome. He loved his family so dearly and would tell anyone he met how proud he was of his two daughters and how Carol will always be the love of his life.
The family would like to thank the staff at Health Sciences Centre – MICU, the Grace General Hospital, and all the Home Care Staff who provided care to him.
Due to Covid-19, there will be no service at this time. A family memorial will be planned for a later date.
In keeping with Dennis's wishes, Honorary pallbearers are all the RCMP that served over the years at the Gypsumville Detachment.
In lieu of flowers, please consider a donation to the Manitoba Lung Association.