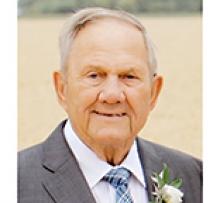 On October 12, 2020, after the last load of corn was in, and the fall work complete, Harlan passed away peacefully in his sleep, at the Carman Memorial Hospital, at the age of 82 years.
Harlan leaves behind his wife of 57 years, Sharon, children, Rodger (Cindy), Allison Morse (Bob), and Johnny (Sarah), grandchildren, Brent (Jennifer), Darren (Laura), Christine (Travis), Whitney, Lauren (Matt), Lexi (Alex), Ellen, Gwen, Ivy and Liza; and, great-grandchild, Olivia.
Harlan grew up in a large family and will be missed by his siblings, Milo, Corliss Rosenberg (Jerry), Fay, Cordell (Beverly), Beverly Bossuyt (John), Raymond, Myrna Thompson (Murray), David (Cindy) and Mark (Amie). He will also will be missed by his sisters- in laws, Marj (Gary), Donna (Rene), and Barbara (Brian); numerous nieces, nephews and other extended family and friends.
Harlan was predeceased by his parents, Elmer and Martha; brother, Sinclair, and brother- in- law, Max Kendall.
Dad was born on January 20, 1938 in Winnipeg. His whole life was spent in Brunkild and consisted of family and farming. One day in grade 10, Dad came home from school and told his mom he was done with school and was going to farm. And that is just what he did.
He spent several summers custom combining in the United States, starting in Kansas and working his way up to Manitoba.
Even while on a holiday with Mom to Australia, Dad ended up running a combine for six days. Dad was always looking for a reason to get behind the wheel. A parts run to Regina was a great way to spend the day.
In the winter, Dad was either watching hockey or driving kids, grand kids, neighbour kids or strangers' kids to hockey. He loved watching all sports, especially when they involved his grandchildren.
Dad was a Winnipeg Jets and Manitoba Moose season ticket holder for 47 years.
The family extends their thanks to the staff at GA3 at HSC, as well as those who cared for Dad at Carman Memorial Hospital.
With Dr. Sharkey's medical expertise, Mom's excellent cooking, and Dad's positive attitude, he lived an amazing 82 years.
Due to the current restrictions, a celebration of Dad's life will be held at a later date.

Condolences for Harlan's family may be left, and tribute video viewed, at
www.alternacremation.ca