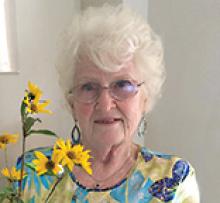 It is with broken hearts that we announce the sudden passing of Margaret Ritchie at St. Boniface Hospital on October 10, 2020, at the age of 82.
Margaret was predeceased in 2011 by the love of her life George Ritchie; her parents, Tannis (Cuddy) and Alex Lester; brothers, Jim and Tom Lester; and sister Marianne Parker.
Left to cherish her memory is daughter Cheryl (Clifton), and her children, Jordan (Amy) and baby Preston, Chelsea (Jason) and children, Jace and Brielle; son Kevin (Paula) and children, Brad, Jake and Robyn; son Ian (Nathalie) and children, Alexander and Chase. She is survived by her sister Marcia Rogocki (Bernie); sisters-in-law, Shirley Lester, Alice Lester and Betty Cumming; brother-in-law Allan Ritchie, and numerous nieces and nephews.
Margaret was born on July 2, 1938, in Winnipeg. The following year her parents moved the family to Albert Beach. During her early childhood she spent time being raised by her grandparents Upton and Edith Lester as well as her Aunt Maud at the Big White House at the Lester Homestead; a heritage Margaret was very proud of. Later, she moved back to Winnipeg with her family where she attended St. Mary's Academy.
It was at Lester Beach that Margaret met her true love George. They married in 1958 in Winnipeg. They started a family, and then due to Dad's work they were transferred to Saskatoon, and then Dartmouth, before returning home in 1978.
Mom and Dad started building their cottage at Lester Beach in 1961, where they created many happy memories with their family. They enjoyed beach life and cross country skiing in the winter. For many years, both Mom and Dad had been active members of the Lester Beach Cottage Association. Mom was always willing to volunteer and lend a helping hand.
Margaret was a very social person. Mom and Dad spent many years with the Kinsmen/Kinette's. Later in life they took up ballroom dancing, something they loved to do together. They joined the Westview Dance Club in 1987, even after losing Dad, Mom continued to remain active in the Club. Margaret enjoyed going to MTC, Pops Symphony concerts, and her coffee meetings with friends.
The family would like to thank all of Mom's friends for all their love and support over the years. Especially, during her husband's battle with Alzheimer's and after his passing.
A graveside service is being held at Victoria Beach Cemetery, at 2:00 p.m. on October 17, which happens to be Mom and Dad's wedding anniversary.
In lieu of flowers, a donation can be made to the Alzheimer society of Manitoba or the Heart & Stroke Foundation.