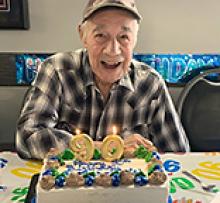 Lucien took his last earthly breath on October 9, 2020, in his 90th year.
True of most children born of the Silent Generation, Lucien was known for his intense and proud work ethic. At the young age of 17, he secured a truck and headed off to the bush where he worked long hours cutting and hauling wood. Later he took that same work ethic and moved on to driving truck, a skill he mastered well and resulted in an excellent driving record.
During these times of hard work, and a simple country life in the Richer area, Lucien raised five children: sons, Leslie, Terrance, Richard, and James, and daughter, Catherine.
With the demands of work and family, there was little time left for his interest of fishing and hunting, and yet he did these activities well too, according to the stories. Later when he retired, he enjoyed collecting and selling scrap metal.
Lucien is predeceased by his parents, Victor and Alice Larocque, brothers, Marcel and Adelard, sisters, Lilliane and Emilie. Lucien has also reunited with his loving mate Diane Bullied.
Left to mourn his passing are sisters, Mary Jane Trudeau and Evelyn Gauthier, children, Leslie (Laurel), Terrance (Darlene), Richard, James (Janette), and Catherine (Roger), nine grandchildren and five great-grandchildren, and numerous nieces, nephews, and dear friends.
A special thank you is offered to his niece, Jeannine, for her skilled and compassionate care towards Lucien in the past years, as well as to the Ste. Anne Hospital and staff.
Due to COVID-19, a private family viewing will be held on Thursday October 22. Cremation will follow and interment will take place at a later date.