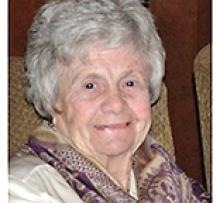 Patricia Joan McGarry passed away peacefully, at the Riverview Health Centre, on October 13, 2020.
She was predeceased by her husband, Dr. Patrick Martin Fenton McGarry in 2002, and her sisters, Gladys and Mavis. She is survived by her six children, Kevin (Betty), Patrick (Melanie), Deirdre, Anne (Charles), Geraldine (Brian) and Martin (Candice), 12 grandchildren and 7 great-grandchildren. She is also survived by her sister, Hazel Davies in England.
Born in London, England in 1927, Patricia lived through the difficult war years as a teenager. She survived the blitz, sometimes under the family dining room table. She entered nursing school shortly after the war and graduated as a registered nurse on July 23, 1948. She joined the Queen Alexandra's Royal Army Nursing Corps and, after various postings in Britain, she was called for overseas duty and posted to a base hospital in Japan, supporting casualties from the Korean War. She was very proud of her military service and the opportunity it provided for an adventurous young nurse. As fate would have it, she met her future husband, a young Irish doctor, Patrick McGarry, at that base hospital in Japan. Upon their return to Britain, they were married on May 17, 1952.
Patricia and Patrick started their family in England, and then immigrated to Winnipeg, Canada. Patricia often spoke of the rough Atlantic Ocean crossing with her then 18 month old, sea-faring son, Kevin. They settled into life in Winnipeg and five more children arrived in the subsequent decade. As a mother of a large family, she was lightning fast in the kitchen so as to make time available for her chosen activities. Patricia was very active and learned to figure skate, downhill and cross-country ski, swim, play tennis and so much more. She made many friends and enjoyed regular bridge, tennis, and golf in their company. She volunteered, taught swimming, and made a late in life return to nursing. She was also an avid sports fan never missing the big skating or tennis competitions. One of her final musings was who had won the French Open.
The acquisition of a family cottage at West Hawk Lake in 1966, began another significant chapter in Patricia's life. The cottage became a source of joy, challenges, and endless adventures! The independent nature of Patricia meant embracing living in a remote location accessible only by often unreliable boats that she often cursed but also mastered. But she also loved nature and the quiet of the surrounding wilderness.
Patricia had a long career as an active grandmother. She spent many Fridays over a 20 year period with her preschool grandchildren - so much appreciated by their mothers. Every grandchild had the "Nana" experience of trips to the zoo, playground and swimming pool, which they fondly remember and cherish.
England always had a special place in her heart, and she had many trips "home" to visit her mother and sisters often dragging with her a gaggle of unruly children. She loved the English gardens in springtime, that her children didn't manage to trample.
Late in life, she spent eight wonderful years living at the Portsmouth in Winnipeg where she made new friends and continued her myriad of activities. Always a great participant and fueled by a love of learning, there were few programs she wasn't involved in.
Patricia has been a true inspiration to her children, grandchildren and great-grandchildren, and independent to the end. We will love and miss her always.
Many thanks to the wonderful staff at Riverview Health Centre. She felt greatly supported in her final days by the dedicated care she received. Patricia would also like to thank her private nurse, Belinda, and the staff at the Rosewood during her stay there.
A funeral mass will be celebrated at St. John Brebeuf Church on Monday October 19, with family only in attendance due to Covid-19 restrictions. Please join us at https://patriciamcgarry.wixsite.com/website
In lieu of flowers, donations may be made to the Riverview Health Centre Foundation or a charity of choice.