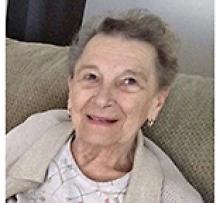 Peacefully, on October 15, 2020, after having suffered a stroke, Elsie Cave passed away at the age of 91, independent to the end.
Elsie was born in Amsterdam, Saskatchewan on May 15, 1929, to parents, George and Jenny Burdenuk, one of five children. The family moved to Gilbert Plains, Manitoba and that is where she married Robert (Bob) Cave on July 12, 1950. They had two children, son Robert (Rob) and daughter Nancy. The young family moved to the home on Rosseau Avenue West in Transcona in 1958 and became great friends with their neighbours the Corbets, Lyle and Denise. For Elsie this was a friendship that lasted for 62 years and only ended with her passing.
Elsie was predeceased by her husband Bob; son Rob; grandson Kevin; brothers, Ernie and Albert; and sister Mary. She is survived by older sister Rose.
Elsie will be lovingly remembered by daughter Nancy (Gordon); granddaughter Michelle (Bill); and great-granddaughter Morgan; daughter-in-law Joyce; grandchildren, Michael, Crystal (Justin), and Ashley (Dwight); and great-grandchildren, Nick, Aiden, Asher, Kaitlyn, Rory and Lily.
Per Elsie's wishes, cremation has taken place and she will be laid to rest next to husband Bob in the Transcona Cemetery.