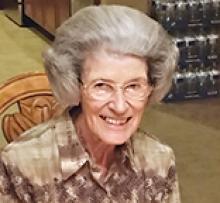 On the afternoon of October 2, 2020, Violet was called home by our Lord. Vi was in the care of EVM assisted living in Gilbert, Arizona at the time of her passing. She had been suffering from Congestive Heart Failure. Vi was 88 years young.
Vi was born on November 29, 1931, in Libau, Manitoba to parents, Elsie and Fred Helwer. She grew up on a farm outside Libau and was the oldest of nin children, Ron Helwer of Brandon, Harvey Helwer (predeceased her), Ed Helwer of Teulon, Esther McKenty of Winnipeg, Eleanor Olive (predeceased her), June Letkeman of Plum Coulee, Irvin Helwer of Teulon and Marge Hanssen of Nakamun Lake, Alberta.
Violet left the farm at age 16 and moved to Winnipeg where she was hired immediately by Eaton's department store. Vi worked at Eaton's during the day and went to the Success Business School in the evening. When Vi completed business school she was hired by North Star Oil to work in accounting, then recruited by Silverwood's Dairy where she worked in the accounting department as well. While Vi was working at Silverwood's Dairy, she met, and was courted by, Lorance Hubert. Vi and Lorance were married on October 3, 1953.
In October of 1956, Vi and Lorance moved to San Jose, California. Lorance went to work for Ford Motor Company and Vi went to work for Safeway Candy Plant in accounting. On January 26, 1959, Vi and Lorance were blessed with the birth of their son Trevor, and on August 1, 1962, they were blessed with the birth of their daughter Karen. Vi and Lorance relocated to Elk Grove, California in February 1989, as Vi continued to work for Safeway in inventory control. Vi retired from Safeway in 1992.
After Lorance's passing in December 1998, Vi and Trevor decided to live together. Vi and Trevor continued to live together for the next 22+ years, until our Lord called Vi home on October 2, 2020. Vi and Trevor lived together in Maricopa, Arizona since September 2014.
Vi was a faithful Christian lady that kept her faith through her entire life. Vi was famous for saying she "Loved Life" and always had a positive attitude. She had a great sense of humor and a very kind and loving soul. She was known to be an excellent cook, baker and hostess. It was a wonderful experience to be invited to her home for dinner. She loved playing cards, especially bridge. She had a very broad range of music she enjoyed, from Classical, like Bach and Beethoven, to Rock, like Emmerson Lake, Palmer and Santana.
Vi was known to always be willing to help when there was a need. Vi was the "Best Mother in the World" to her son and took great pride in the successes and interests of her children and grandchildren. Vi was an avid reader, especially about health and supplements. Vi had exceptional knowledge in this area that even made some doctors jealous. Many referred to her as a "walking encyclopedia"! She had a keen mind and could remember what she read.
She is already dearly missed!
Vi is lovingly remembered by her son, Trevor; daughter, Karen; son-in-law, Mike; and two grandchildren, Jennifer and Justin; brothers, Ron (Vera), Ed (Adeline) and Irvin; sisters, Esther (Clare), June and Marge (Henry); many nieces, nephews and friends.
Prayers and viewing as well as the funeral are being coordinated by Gilbart Funeral Home in Selkirk, MB. The prayers and viewing are scheduled for October 28 at Gilbart Funeral home. The Funeral services will be at Good Shepherd Lutheran Church in Selkirk on October 29. Interment will follow in the Selkirk Lutheran Cemetery. Attendance will be limited because of the Covid-19 restrictions.
Pallbearers will be: Ron Helwer, Ed Helwer, Irvin Helwer and Trevor Hubert.