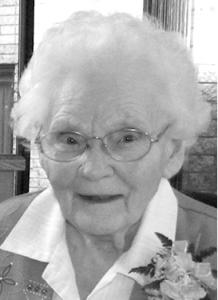 LOEWEN: Agnes Esther (nee Penner), age 94 years, beloved wife of the late Walter Loewen, went to be with her Lord and Saviour on Thursday, October 15, 2020 at Fairview Home. Mom was born November 2, 1925 in Sagradovka, Ukraine; the first born of Henry and Anna Penner. At the age of 10 months, they immigrated to Canada and homesteaded in Fairholm, SK. When Mom was 8 years old, her family moved to Sanford, MB. She took her schooling here, and later went on to attend Winkler Bible Institute. As a young woman, Mom worked at Independent Jewelers and as a postmaster in Winnipeg, as well as being an aide at the Brandon Mental Hospital. Mom and Dad were married on June 19, 1954 and together they farmed in the Justice area for 35 years. Here they raised their family of three daughters and one son. She enjoyed being a homemaker cooking, baking, and tending to her garden and flowers, but most of all she loved caring for her family and later on, her grandchildren. Mom had a strong Christian faith. She was very involved in the Justice, MB Church, as well as the Gideons, making many good friends along the way. Mom liked to sew, crochet, and especially liked to read, so it was no surprise when she and Dad started a new chapter in 1981 with the purchase of The Lighthouse Bookstore in Brandon. Mom loved the bookstore and took great pride in serving people with warmth and a smile. Mom and Dad moved from the farm to Brandon in 1992; they adjusted easily to city life, enjoying being closer to family and work. In 2005, they moved to Hobbs Manor, where Mom was very involved in activities and fully enjoyed the lifestyle. Due to declining health, Mom moved into Fairview Home in 2014. Mom is survived by her children Marlene (Bill) Lecuyer, Laura Loewen (John Downing), Judy (Brad) Dick, Albert (Kim) Loewen; grandchildren Christopher and Cherise Lecuyer; Cody and Brett Dick; Ryan, Brooke, and Hailey Loewen; sister Elsie Pankratz, brother Art (Liz) Penner; and in-laws Helen Penner, Marg Loewen, Martha and Ross McMillan, and Jessie and Dave Penner. Mom was predeceased by her husband Walter Loewen in 2011, brothers Ed and Pete, and several in-laws. The funeral service was held at Memories Chapel on Sunday, October 18, 2020. Pastor Gerry Harms officiated. Interment took place at Sparling Cemetery. Donations in memory of Mom may be made to The Gideons International in Canada, P.O. Box 3619, Stn Main, Guelph, ON, N1H 6T9, www.gideons.ca. The family would like to thank the nurses and aides at Fairview Home for the excellent care Mom received over the past 6 years, and for the compassion and thoughtfulness shown to us during her final days.