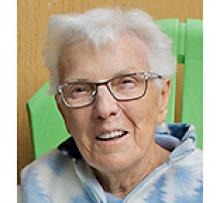 Mom passed away peacefully on Sunday, October 18, 2020.
Left to mourn her passing are her children: Shaun Leonoff (Les), Lori McKay (Brad), Marc Wankling, Blair Wankling (Janet Harvey); grandchildren: Nicole Leonoff (Ryan Johanneson), Darcy Leonoff (Joanne), Megan Godard (Yvon), Patrick Leonoff (Karisa Morrow), Jessica Byskal (Nick), Nathan McKay (Brianne), Roen McKay, Morgan Wankling, Lindsey Wankling and Eric Wankling; 17 great-grandchildren, as well as her many dear nieces and nephews and special niece and friend, Charlene Wells-Phelps. She was predeceased by her beloved husband Claude, sister Verda Hogue, brother Leonard Wells and at the young age of 18, her mother Emma Wells.
Mona was born in Winnipeg on September 4, 1927. She grew up on Bowman Avenue and Greenwood Place and subsequently worked at Great West Life. Then her new life began when she met and married Claude Wankling in 1948. When Mona and Claude were first married they lived on Toronto Street where they welcomed their first daughter, Shaun. They moved to Olive Street in 1955, and while living there, they had a second daughter, Lauren (Lori) and put down permanent roots in St. James. After their move one street over to Rita Street, Marc and Blair were born. Mom remained in that forever home for the next 62 years!
Mom and Dad became active members of their new neighbourhood, enrolling their children in the newly opened schools. They were pioneering members of Silver Heights United Church and Mom remained an active member always. They also cherished many happy times with the "Rita Street gang" who were building their homes and watching their kids grow up together. When her own children became older, Mom started volunteering outside of the home in the local schools. She volunteered at Strathmillan, Athlone and Bruce Schools. She was active on many committees, championing family life and enrichment programs. She also taught numerous kids in St. James through the years at the Tiny Tots program at both Sturgeon Creek and Silver Heights Community Clubs. After Dad passed away, too soon in 2000, Mom continued to stay active with travel, family events, meals out and visits with friends. One of her travel highlights was her trip to San Diego with her four children for her 90th birthday. She welcomed all to her beautiful garden and took great pride in her roses. Backing on the schoolground enriched her life in many ways as she enjoyed the children playing and making new friends who passed by while she was in her yard.
Throughout her life, Mom had a great love for all dogs including family dogs, Scamp, Snoopy, Smokey and Shadow and her numerous granddogs. Mom had many other passions including horseback riding in her youth, crafting, sewing and her lifelong love of camping right up to her 85th birthday. Her planning of the month long camping trip was the highlight of every year. These trips allowed her to engage in her love of nature. She was an environmentalist before there was such a thing! She was always happy to be the host for every Birthday, Easter and Thanksgiving, preparing a big meal for all. Christmas was something she greeted with great excitement every year, making sure not a detail was missed! Her greatest love of all, though, was her family. She took great pride in saying that she had four children, 10 grandchildren and 17 great-grandchildren.
She will be greatly missed by all of them.
Thank you to the staff at Golden West Centennial Lodge for the care they gave her in her final months.
If you so wish, donations can be made to the Heart and Stroke Foundation, Assiniboine Park Zoo Animal Care Fund, Prairie Spirit United Church, World Vision Fund or Winnipeg Humane Society.