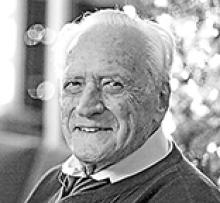 Our dad, John Enns, had an eventful and rewarding life. He died on October 19, 2020, at Bethania Personal Care Home, at the age of 90. He was predeceased by the love of his life, Martha Enns, his wife of 58 years.
He is survived by his four children: Martin Enns (Ingrid), Charlotte Enns (Greg Evans), Erich Enns (Joanie Peters) and Anne-Marie Klassen (Henry); 11 grandchildren: Andrea Regier (Ben), Lukas Enns (Ang), Sonja Schrag (Nick), Jakob Enns (Brittany), Jessica Evans, Nicholas Evans, Jami Chhabra (Amit), Holly Enns, Liza Zahara (Aaron), Johanna Klassen, and Lena Klassen; and nine great-grandchildren: Airo, Rocky, Charlie, Rose, Arya, Elina, Henna, Olan and Peter; a surviving brother, Henri Enns and wife Marie, and sister-in-law, Irene Enns, and many nieces and nephews whose company he enjoyed.
Dad was born near Ste. Elizabeth, Manitoba, and he grew up in Winnipeg in a lively family, one of seven children of the late Aeltester Johann and Agathe Enns. During his younger years he was heavily involved in the activities of the "Jugendverein" (Youth Group) of the Schoenwieser Mennonite Church, later called First Mennonite Church of Winnipeg, where he remained as a lifelong member, singing in the church choir for some 50 years. This is also where he met Martha and where they were married.
After attending university and law school, Dad gained employment with the Manitoba Justice Department, for 10 years as a Crown Attorney, followed by 31 years as a Provincial Court Judge (criminal division). He was considered by the legal community to be a thoughtful and considerate judge, and the task of finding the appropriate sentence, especially for disadvantaged but serious offenders, was not easy for him.
Dad, together with his family, spent many summers enjoying the cottage at Big Whiteshell Lake. Mom and Dad also made several trips to Europe and to visit Martha's family in the USA. Dad had many interests and activities. He was a founding member of the Winnipeg Mennonite Theatre, the founder of Prairie Performances, as well as being an avid chess player and an amateur cellist and pianist. He so enjoyed making music with others and never missed his weekly rehearsals with his string group, Consort of Friends, and the Winnipeg Pops Orchestra. He kept active into his 80s with water skiing, sailing, and downhill skiing.
Dad was a lover of words, and this came through in his work in the courts as well as his hobbies and relationships. Dad, or Opa, was a wonderful storyteller and he often held the attention of children and adults with his interesting and inventive tales. He had committed many poems to memory and could recite them at any occasion. He was passionate about the music of Schubert and even travelled to Germany as recently as June 2019 to attend a "Schubertiad" (Schubert Festival). As a person of strong convictions, Dad sometimes created conflicts in his relationships with others, nevertheless, all that knew him, knew him to be a sincere and good person.
At this time, only a private family gathering is possible.
As an expression of support, donations can be made to Bethania Mennonite Memorial Foundation.