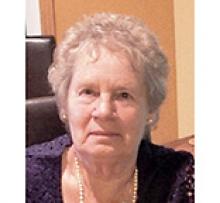 Nellie passed away peacefully with family by her side.
Those she leaves to cherish her memory
are her children, Marinus and Leona, Gerda and Jerry, Martha, William and Darcy, Pat and Patti, Ben and Tracy, Eddie, Martin and Tracey; 20 grandchildren; 23 great-grandchildren; her siblings, Ted and Evie, Freda, Gidge, Kasmer, William and Irma; in-laws, Ad, Antoon and Willie, Ria and Theo, Rien and Maria; many nieces, nephews, extended family and a large circle of close, loving friends.
Nellie was predeceased by her husband Harry; her son Tim and granddaughter Nicole; her parents, William and Gerda; sisters, Gerda, Wilma, Cathy and Jackie and her brother Gerry.
Nellie emigrated from Holland to Canada in 1951 with her immediate family. A couple years later, she met Harry, her loving husband of 62 years. Nellie and Harry managed a successful dairy farm in Lorette, Manitoba for 35 years and remained on the farm site following their retirement. For a while, Nellie also worked at St. Amant Center where she could be closer to her son Eddie.
It was on the farm that Nellie and Harry raised their family of seven boys and two girls and dealt with the loss of their son Tim. Family was the center of Nellie's life and nothing pleased her more than hosting family gatherings, whether they were simple breakfasts after Sunday morning church or larger robust birthday evenings. Watching her family grow with grandchildren and later great-grandchildren was a highlight of Nellie's life. She loved having kids around! In quieter times, Nellie enjoyed her flower beds, playing cards with family or friends, and relaxing in her favourite chairs, knitting, bird watching and watching the news or engaging game shows.
Nellie also gave back to the community through charity work for St. Amant, Food Hamper donations and distribution and involvement in the Church.
Due to Covid restrictions, an invitation only Roman Catholic funeral and prayer service will be held. We thank all for their thoughts and prayers.
A special thank you to the staff at Ste. Anne Hospital and her doctors for all the care and compassion given to our mother.
In lieu of flowers, please consider a donation to the Ste. Anne Hospital Fund, St. Amant Foundation, or a charity of your choice.