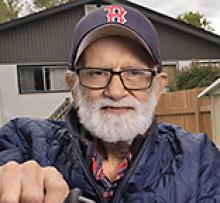 Our father, Jagdeep Singh Bawa, passed away on October 21, 2020, in his home.
He is greatly missed by his daughters, Sumita and Savita, his son Ian, his sons-in-law, Scott and Ivan, and his five beautiful grandchildren. He was predeceased by his wife, Pritam Bawa, who passed away in 2007 after 36 years of marriage. Jagdeep was born in New Delhi, India, and was one of the youngest of five siblings.
Jagdeep, known as 'Jack' to his friends, made the solo journey to Canada in the early 1970s. Jagdeep spent his first years in Canada building a life for himself in order to bring his wife and daughter to their new home in Winnipeg, Manitoba. After the arrival of two more children, a daughter and son, Jagdeep eventually began a successful career with Canada Post. After 30 years, Jagdeep retired and spent the remainder of his years with his children and grandchildren.
Jagdeep was a lover of music, history, movies, sports, gardening, learning new languages, cooking, and trying new foods. He was an amazing tabla player and continued to play into his later years. In the last decade he found a new talent, acting in films, which he thoroughly enjoyed as he got to work along side his son. Jagdeep's greatest treasures were his children and grandchildren, who he lived for and proudly spoke of often. He was a kind and strong man, who loved to laugh, talk, and learn. We miss him.
"If you miss the train I'm on, you will know that I am gone. I love you." - Sumita.


"Dad, I know you quietly guided and loved me my whole life, thank you. I love you and miss you so much." - Savita


"Ever since Mom passed away, you became my best friend, my confidant, and my source of drive and inspiration. I owe you everything I have. I love you and miss you so much it hurts." - Ian

Due to provincial restrictions, there will be an online ceremony on Thursday, October 29, 2020, with Thomson "In the Park" Funeral Home. Those interested in attending, please contact immediate family for a link to the service.
We request, in lieu of flowers, donations be made to Diabetes Canada.