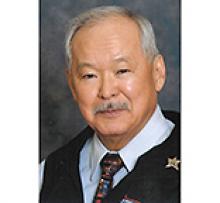 George Masazo Takashima of Lethbridge, beloved husband of the late Peggy Anne Takashima, passed away on Wednesday, October 14, 2020, at the age of 86.
George is survived by his children, Cheryl (Paul) Lenthall of Lethbridge, Arlene (Joe) Yakielashek of Winnipeg and Raymond (Yvette) Takashima of Saskatoon; grandchildren, Robyn (Richard) Miller, Kyle Knodel, Graham Lenthall; Brendan and Kayla Yakielashek; Chandra (Duncan), Jessie Rae and Kiernan Takashima; three great-grandchildren, brother-in law John Fry, nieces and nephews. Besides his loving wife, Peggy, George is pre-deceased by his parents, Yoshichika and Kikuyo; brother Masashi and sister Masami.
George was born on August 8, 1934, in Vancouver, BC. In August 1942, George and his mother boarded a train to meet his father in New Denver, BC, where they were interned during the Second World War. In 1946, the family moved to London, ON, where George completed his grade 13, then a year at London's Teacher College. From 1948 to 1953 George was a member of the Army Cadets in London - the Royal Canadian Army No. 9 Corp, where he rose up the ranks to Major, second in command. In 1956, he continued his education at United College in Winnipeg before receiving his B.A. and B.Ed. from the University of Manitoba. In 2010, George was honoured by St. Stephen's College at the University of Alberta with an honorary Doctorate of Divinity.
George loved to work. From 1955 to 1993, George's career in the field of education took him to many communities throughout Manitoba, Ontario and Saskatchewan as a teacher, language consultant, guidance counsellor, field officer, principal, assistant superintendant and superintendant. Over the years, he also served as a member of the Clergy for various churches throughout Saskatchewan, Alberta and BC. When he retired from education in 1993, he accepted a position as half-time Pastor at the Japanese United Church in Lethbridge, AB, until 2006, as well as half-time Presbytery Consultant, South AB Presbytery for five of those years. In 2006, he and Peggy moved to Toronto for ten months where he served as Interim Executive Minister, Ethnic Ministries at General Council Office. When they returned to Lethbridge, George continued to serve as a member of the Clergy for a variety of communities throughout Alberta and British Columbia until early 2020.
George believed in giving back and was involved in the life and work of each community. He served in various capacities on committees in every community he lived, including the Northern Manitoba Trappers' Festival in The Pas, Kiwanis Club in Pembroke, PRIDE SK, Manitoba Teachers' Society, Manitoba Association of Principals and Manitoba Association of School Superintendents. He was Executive Director of the Canadian Student Leadership Association for a number of years and mentored many of their members. His volunteer work with the United Church included serving as chair for KYOGIKAI (Japanese United Church Association), Alberta and Northwestern Conferences and South Alberta Presbytery, and the National Ethnic Ministries Advisory Council, and was a member of General Council Executive and Sub Executive. Most recently, he had been a member of the National Association of Japanese Canadians - Endowment Fund Committee, Human Rights Committee-NAJC, Lethbridge Twinning Society, Nikkei Cultural Society, Southern Alberta Ethnic Association and supported the Japanese Gardens in Lethbridge by leading tours for schools and other groups. From 2010 to 2019, on behalf of the Nikkei Cultural Society of Lethbridge, George took on the yearly project of organizing and conducting a "Ghost Town" bus tour to the West Kootenays to increase awareness of the various Japanese internment camps.
George was a passionate member of the Lions Club International for over 56 years. With the exception of four years, he was an active member until his passing, having served as President, Secretary/Treasurer, Zone Chairman, Council Chairman, District Governor, Organizer/Director of Lions Youth Leadership Camps from 1992 to 2004 and chaired various committees. He and Peggy hosted numerous students through the Lions Youth Exchange program, many who remained friends over the years.
George received many awards over the years including Yorkton Citizen of the Year 1986, the Queen Elizabeth II Diamond Jubilee Medal, Lions International Presidents Award, Melvin Jones Fellow Award for Dedicated Humanitarian Services - Lions Clubs International Foundation to name a few.
George may have been a workaholic but also enjoyed travelling. He had a keen interest in meeting new people, seeing new sights and experiencing new cultures ... especially the food! He and Peggy travelled often across Canada and the US, made numerous trips to Japan to visit family and exchange students who had stayed with them, and travelled to Europe, Mexico, Hawaii and cruised the Caribbean.
The Takashima family would like to thank Dr. Dalphond, the Palliative Care staff at St. Michael's Health Centre, Pastor Eva Stanley, friends and family for their support.
A private Memorial Service will be held at 2:00 p.m., on Monday, November 9, 2020, at MARTIN BROTHERS RIVERVIEW CHAPEL, 610-4 Street South, Lethbridge Alberta, with Reverend Eva Stanley officiating. Please email Cheryl at cheryl.lenthall@gmail.com if you wish to attend. The service will also be available via livestream by visiting https://www.mbfunerals.com/, and clicking on George's obituary.
Due to the restrictions in place from the Chief Medical Officer of Health - Funeral Services are now restricted to 90 attendees.
In lieu of flowers, donations can be made to Canyon Church Camp Association, 418-210A 12A St. N, Lethbridge, AB T1H 2J1 or Nikka Yuko Japanese Garden, P.O. Box 751, Lethbridge, AB T1J 3Z6.

Visit www.mbfunerals.com
to send a condolence.