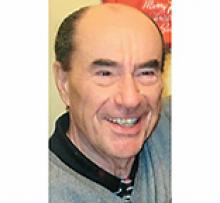 Peacefully on October 21 Jack passed away at the age of 78.
He will be lovingly remembered by his wife of 57 years, Audrey, his daughter Sandra (Morgan) and his son David (Helena). Jack was very proud of his five grandchildren, Stephanie (Maurice), Scott (Megan), Eric (Emily), Lauren (Brayden) and Marissa, and also his three great-grandchildren, Logan, Dean and Chloe. Jack is also survived by his two brothers, Andy (Cheryl) and Bruce (Arlene), his sister-in-law Dorothy Thomson, and sister-in-law and brother-in-law Barbara and David Duff.
Jack was predeceased by his parents, Agatha and John, his sister Joan (Wally) Norquay, brother-in-law Douglas Thomson, and in-laws, Dorothy and Jim Dunn. He also leaves many nieces and nephews.
Jack loved all sports especially curling. He was very proud that he was the youngest person to ever curl in the Brier, which he did in 1958. He also represented Manitoba in the Canadian High School Championship in 1959.
Jack loved his family more than anything and he will be greatly missed by all of us.
Due to Covid-19 there won't be a formal service.