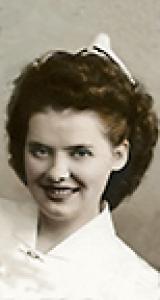 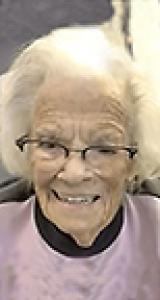 In the early morning hours of her 96th birthday, with family at her side, Mom peacefully passed at Red River Place in Selkirk.
Mom was predeceased by her loving husband, Thomas William Patterson, father, Murdoch Daniel and mother, Frances Catherine Conquergood (nee McKay), infant brother, Thomas, brother, Stewart Roswell "Ross", sister, Flora Elizabeth Green "Florrie", her twin sister, Frances Murdena Kerr "Deanie", sister, Shirley Jessilind White, sister, Margaret Wilhelmina Smee "Willie" and her eldest son, Thomas Ross.
Left to cherish her memory are her sons, Reginald Wayne (Marlene), Richard Lorne (Leslie), and Rodger Phillip and daughter-in-law, Fran, along with her beloved grandchildren, Jason (Keri), Elizabeth (Neil), Natalie, Reggie (Pam), Tommy, Michael, James (Chantel), Bryan (Tori), Joseph and Marshall, and numerous great-grandchildren, nieces, nephews, and friends.
Jean was born in Winnipeg and raised on the family farm in Lilyfield. She attended Lilyfield School and completed Grade 12 in Transcona. After high school, Jean completed her training as a Registered Nurse at the Misericordia School of Nursing. She nursed at Gladstone General Hospital for two years before returning to Winnipeg to continue nursing, until she married Tom in November 1948. Together, they raised their family of four boys on the Patterson farm in Lilyfield, where she continued to live until only three months before her passing.
In 1970, Jean re-certified as a Nurse and did private duty nursing for about ten years.
Mom's greatest love was her family and her home, followed closely by her church and community. She was a lifelong member of the Lilyfield United Church and active in the United Church Women's group and Mount Lildon Women's Institute. She loved "good" music, reading, crosswords and, most of all, having friends and family visit. She was a gracious hostess who could put together a delicious meal, complete with fine china and teacups, with seemingly no effort on short notice. She could not tolerate an improperly set table!
She was close to her brother and sisters and looked forward to Deanie's visits every summer in the later years. Mom had one speed and that was "go". She liked to be busy and was independent (she would not want us to say she was stubborn!). In addition to being a wife and mom, she also worked hard to help Tom on the farm. Her beautiful hands were a testament to a life of hard work, love, and service to others.
Unfortunately, during her last three months, Jean was moved five times between various health facilities. This, along with COVID-related restrictions, was difficult for her and her family and was only bearable because of the caring health care staff at each facility. Thanks also to all the home care workers who tended to Jean at home during her later years.
In lieu of flowers, donations can be made to Lilyfield United Church, c/o Box 22, RR2, Winnipeg, R3C 2E6.
A Celebration of Life will be held on a later date.