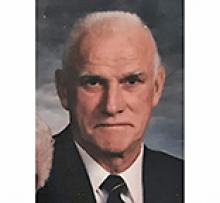 Peacefully, with family by his side, John Albert Klimpke, in his 96th year, passed away at the Stonewall Hospital on Thursday October 22, 2020. He was born in the RM of Rosser in the Lilyfield District on June 17, 1924.
He is survived by his wife of 74 years, Sophia. His children are: Kenneth (Audrey), Barbara (George), and Leonard (Karen). He is also survived by his six grandchildren, Kimberly, Andrea, Kent, Timothy, Lauren, and Myles. He is also survived by 11 great-grandchildren.
Predeceased by his grandson, Douglas Williams, parents, Fritz and Maria, and his six brothers and four sisters.
John was a proud farmer his whole life in the Rosser area (dairy and grain). He was a life long member of Immanuel Lutheran Church. He was an avid sports fan and followed his children and grandchildren all over the province attending hockey games, baseball games and football games. He was also lifetime member of the Stonewall Legion Branch #52.
A graveside funeral service was held at the Lilyfield Cemetery on Monday, October 26, 2020.
In lieu of flowers, if friends so desire, donations can be made to Immanuel Lutheran Church, 2528 King Edward Street, Winnipeg, Manitoba, R2R 2Y8 or to the charity of your choice.
A special thank you to the Pine Falls Hospital and the Stonewall Hospital for their excellent care to our husband and father, John.
Thank you to Ken Loehmer for guiding us through this process with such care and compassion.