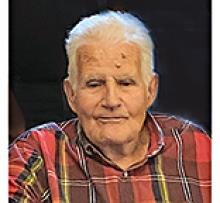 Ted passed away unexpectedly on October 21, 2020 at the St. Boniface Hospital.
He was predeceased by his wife, Margaret (nee Vergonet); and his parents, Phyllis and Herbert Stevens. He is survived by his children: Tricia Carver (George Lyall), Douglas Stevens (Connie), Scott Stevens (Lorraine), and Chris Verhoeven (John); as well as grandchildren: Madison (Madison), Jack, and Dana Carver, and Courtney, Samuel, Thomas, and Jordan Stevens. He is also survived by his brother, Phillip Stevens (Carol); and sister, Sheila Stevens; as well as many cousins, nieces, nephews, and their extended families.
Ted was born on July 21, 1931 in Regina, SK, to Phyllis (nee Cook) and Herbert Stevens. At nine, Ted and his family moved to Dyment, ON where he attended school, walking miles every day to and from school. In 1945 they moved to Winnipeg, MB where Ted finished high school by correspondence courses, and then started a successful surveying career, receiving his Commission as a Manitoba Land Surveyor in 1955. In 1960, he helped define the northern Manitoba border along the (at the time) Northwest Territories, and started a hobby of collecting, driving, and fixing up Bombardiers - his preferred method of transport. He worked for the provincial government until 1970, when he and Margaret started their own surveying business of Stevens Surveys, which is still in operation. When he wasn't working, which was rare, Ted became involved with circular sock knitting machines, woodworking with wood from his own saw mill, and repairing machinery (like his Bombardiers, and Volvos), as well as helping Scott with his farming operation. He frequented sock machine conventions, and taught others how to work their own antique knitting machines, and took pride in fostering this interest in his children and grandchildren. Ted was also a fierce animal lover, and rarely went any length of time without an animal companion, whether it was his dog, cats, or the community of woodland wildlife that lived and were well fed in his backyard.
Ted spent most of his life outdoors, whether it was surveying the North or gardening, chopping firewood or fixing up vehicles. He was a unique and genuine western pioneer, and a true gentleman. We will sorely miss his quick wit, charming grin and subtle sarcasm, which remained as vibrant as ever. He was very fortunate to have good health until the time of his passing. This summer, Ted had an extra large garden with a magnificent harvest, and the whole family took joy in the time spent gardening with him.
A Celebration of Life will be held at a later date.