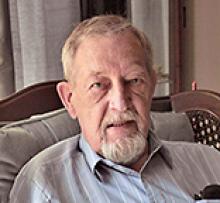 It is with great sadness the family announces the passing of Herman Froese, aged 85 years. Herman passed away peacefully at Grace Hospital, with nurse Noel by his side, after a brief battle with Covid -19.
Herman leaves to mourn his loving wife of 60 years, Mary Froese (nee Koop), son Rick Froese (Karen), son Curt Froese (Marsha Saldat and family), daughter Pam Fileccia (Phil and his four children and four grandchildren); grandchildren, Lindsay Froese (Mitch Glenn and Opal), Alyssa Heinrichs (Carson, Annabella and Makinley), Cameron Froese and Kelsey Morrison (fiancé Kirk Peters and his five children). Herman is also survived by his siblings, Mary (Mitch) Warkentin, Ernest (Rose) Froese, Martha (Abe) Friesen and Ruth (Henry) Spenst and their families, as well as Mary's siblings, Abe Koop (Helen Koop), Elsie (Abe) Bartel, Helen (Ben) Giesbrecht and their families.
Herman was born in Steinbach, MB to Cornelius M. Froese and Maria (nee Bartel) and raised on the family farm in Grunthal, MB. He attended Green Valley School in Grunthal. He met and married the love of his life, Mary Koop, on July 17, 1960. As a young man he moved to Winnipeg to work for North American Lumber and then continued to Alberta with the company. He returned to Manitoba to drive as an owner operator and later dispatch for Du-Rite Cartage. He later moved into the crane business working for Litz Cranes and then as a dedicated employee of Able Movers with a brief term at Parkdale Construction in between. He retired from dispatching at Able Movers after a 20 plus year career in December 1999.
Herman and Mary bought their first home in Wolseley, raising their three children in this community. They eventually moved to Transcona and made many new friends and recently moved to St. Vital to be near the support of daughter Pam.
Herman and Mary enjoyed many summers at the cottage in Beausejour, MB entertaining friends and family. Herman enjoyed golf and friends Ben Friesen and John Derksen joined him for many games. Herman also had a passion for music whether enjoying the service and singing of hymns at Sargent Avenue Mennonite Church or playing instruments such as the organ and later the Omnichord (or Q Chord). Herman also enjoyed photography and spent hours in his dark room developing his own photos. He was an avid snowmobile rider attending races with brother-in-law Abe. As well, his summers were spent touring on his motorcycle with the Geritol Angels. He also enjoyed attending activities his grandchildren and great-grandchildren participated in such as concerts and sports. After retirement Herman and Mary enjoyed several winters at Leisure World in Weslaco, Texas.
Herman will be fondly remembered by family and friends for his charm, gentleness, amazing memory and the twinkle in his eye.
Herman was predeceased by his grandson John Aaron Froese, parents, Cornelius and Maria Froese and Cornelius' second wife Anna (Unger, nee Friesen), in-laws, George and Mary Koop (nee Kasdorf), brothers-in-law John Koop and Henry Warkentin and sister-in-law Linda Koop.
The family would like to thank the staff at the Victoria Hospital and especially the staff at the Grace Hospital for the care, compassion and communication offered during this very difficult time made more difficult due to Covid-19 restrictions. Specifically, we would like to thank Jessica, Noel, Kate, Bianca, Brianna and the staff on 5 South at the Grace Hospital.
Due to Covid-19 there will be a small family service when restrictions allow us to gather.
Flowers are gratefully declined but donations can be made in Herman's memory to MCC, Heart & Stroke Foundation of Manitoba or a charity of your choice.

Memories and condolences can be shared on the website https://www.friendsfs.ca